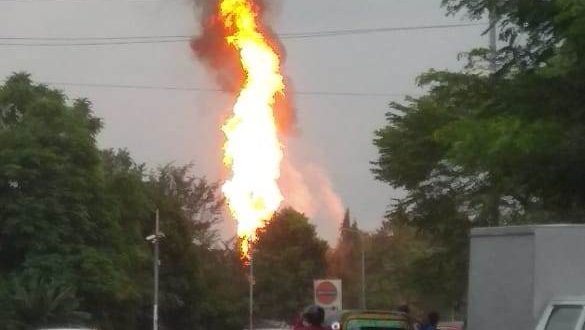 
Bhubaneswar: A major fire broke out at a petrol pump near Raj Bhawan (Governor’s House) in Bhubaneswar.

The cause of the fire is yet to be known.

As many as five fire tenders have been pressed into service to douse the flames at the Indian oil petrol pump.

The Commissionerate Police have cordoned off the area to avoid any untoward situation.

Police Commissioner Sudhanshu Sarangi requested the people to stay away from the Raj Bhawan petrol pump.

He informed that several people have been injured in the incident and they are being shifted to the hospitals.

“The situation is under control so far. Our first aim is to control the situation at the place and then an inquiry will be conducted,” said Sarangi.

According to the eyewitnesses, there was an explosion at the petrol pump and several people have been injured in the incident.

The intensity of the explosion was so high that it felt like an earthquake, said an eyewitness.

Capital Hospital director informed that eight injured persons have been admitted at the hospital.

“Out of six injured persons, six have received minor injuries and two are serious injured,” he said.

(This is a developing story)