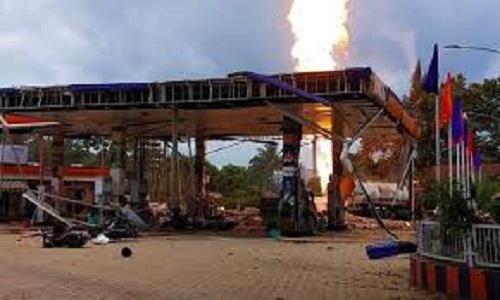 
Bhubaneswar: A person, who had sustained critical injuries in the explosion at the IOCL petrol station near Raj Bhavan on Wednesday, succumbed to his injuries while undergoing treatment at SCB Medical College and Hospital in Cuttack on Thursday.

The deceased has been identified as Satya Nayak (37) of Aska area in Ganjam district.

Another victim Ripu Daman (40) of Lucknow, who has sustained 40 percent burn injuries, is undergoing treatment at the hospital. His health condition is stated to be critical.

Notably, at least nine persons were injured in the explosion at the fuel station on Wednesday.

Meanwhile, the area around Raj Bhawan petrol her pump has been declared safe from any kind of potential hazard.

“In a late night operation the team from #IOCL removed the LPG gas from the tanker that was at the site of yesterday’s explosion. The area around the Rajbhawan patrol pump is now safe from any potential hazard,” tweeted DG Fire Services.