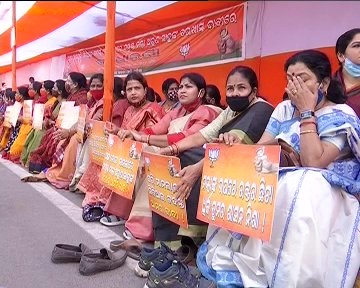 
Bhubaneswar: BJP activists on Monday staged a protest in front of Raj Bhawan in Bhubaneswar demanding a CBI probe and resignation of Minister Arun Kumar Sahoo over the abduction and murder five-year-old girl ‘Pari’ in Odisha’s Nayagarh district.

They demanded that the Minister should resign for allegedly shielding the prime accused in the murder case.

BJP said the agitation will continue till their demands are met.

Commenting on BJP’s protest, BJD vice-president Debiprasad Mishra said, “SIT probe is underway and its head Arun Bothra has sought 2-week time. Everyone wants justice for Pari. The matter should not be politicized.”