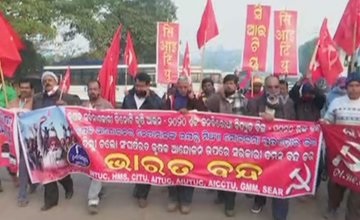 
Bhubaneswar: Normal life came to a halt on Tuesday as the farmers supported by different political parties and trade unions staged protests as part of Bharat Bandh against new farm laws by the Centre.

The protesters staged road blockade at different parts of Odisha, including Bhubaneswar, Rourkela, Rayagada, and Gunupur.

Vehicular movement was disrupted as the political parties and trade unions, holding banners and placards, blocked roads and train movement demanding the repeal of the farm laws.

Eight political parties are supporting the Bharat bandh in Odisha.

All government offices in the state will remain closed on Tuesday.

The state government asked the district collectors to take all preventive measures to maintain law and order and to ensure the maintenance of essential services due to Bharat bandh in Odisha.