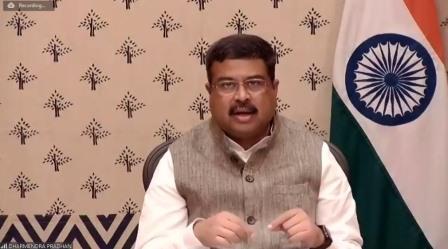 “The above-mentioned temples situated in different corners of Odisha form an intangible resource of spiritual and devotional tourism, bringing not only millions of footfalls and associated revenue but also defining and manifesting in the essential day-to-day life of its citizens,” he said.

“Keeping in mind pertinent and long overdue need for bringing reforms in the governance and management of the four key temples in Odisha, I request your personal intervention in bringing these above-mentioned temples under legislative guidelines along the lines of Shri Jagannath Temple Act, 1955 and Shri Lingaraj Temple Ordinance, 2020 thereby appointing an empowered committee to manage the day-to-day affairs of the temples, better execution of sevas, puja, niti and associated rituals, upkeep, renovation upgradation and development of the temple structure, its premises and improvement of devotee facilities,” the Minister said in the letter.

He said such legal provisions will not only bring a high standard of accountability to the management of the temples with necessary provision for budgeting, planning and audits etc. but also safeguard the long-term interest of the temples and pave the way of offering better facilities to visitors and devotees.

These legislations for the temples shall also go a long way in further strengthening the religious-tourism prospects of the encompassing districts and lead to an increase in domestic and international tourist footfalls, the Minister said.

Dating back to the 13th Century, the Biraja Temple, dedicated to the Mahisamardini form of Maa Durga, is famous throughout Odisha for its own Rath Yatra on the occasion of SharadiyaDurga Puja when it draws thousands of devotees from allover the state.

Dedicated to the eponymous reigning deity of undivided Sambalpur region, Maa Samaleswari or samaleimaa, this temple draws millions of devotees throughout the year, whose numbers swell manifold on the occasion of Nuakhai, the harvest festival of western Odisha.

Considered one of the most revered shrines of the Adi Shakti cult in India, Tara Tarini Temple is one of the four ancient Tantra Peetha and Shakti Peetha in the country. Visited throughout the year by followers of both Hinduism and Mahayana Buddhism, the Tara Tarini temple becomes one of the most-visited shrines during the occasion of ChaitraMela.

Dedicated to the legendary origins of Lord Jagannath, Kantilo Nilamadhab is the most revered temples for the followers of the Jagannath cult and holds immense spiritual significance for the people of Odisha.