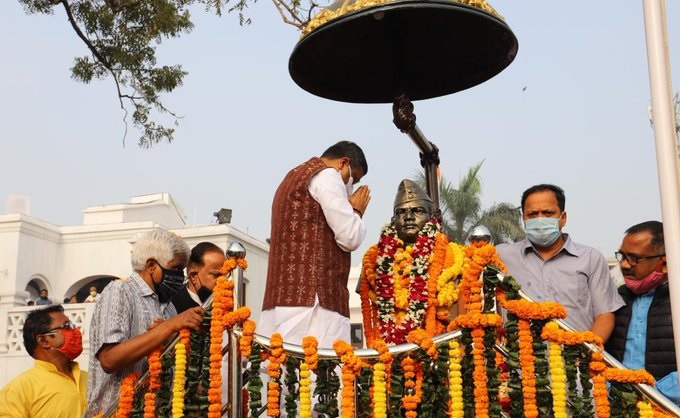 Chief Minister Naveen Patnaik paid tributes to both the eminent freedom fighters. He also visited Janakinath Bhawan, the birthplace of Netaji at Odia Bazar in Cuttack.

“Tribute to Netaji Subhas Chandra Bose, a great son of Odisha. His strong self-confidence, unique ideas and dedication to the country have always been inspiring,” tweeted Patnaik.

“Tribute to eminent freedom fighter Surendra Sai. His heroism and sacrifice in the anti-British armed struggle in Sambalpur to protect the interests of the tribals and the general public are always remembered,” the CM said in another tweet.

“Netaji was a champion of unity & equality who dedicated his life for India’s freedom,” remembered the Governor.

Union Minister Dharmendra Pradhan visited the place and paid rich tribute to the freedom fighter by garlanding his statue on the premises in presence of other dignitaries.

“Paid tribute to one of India’s greatest patriot Netaji Subhas Chandra Bose at Jankinath Bhawan, his birthplace in Cuttack. Celebrating this day as #ParakramDivas is a befitting tribute to Netaji and a just honour for his stellar contribution in the freedom struggle of our nation,” tweeted Pradhan.