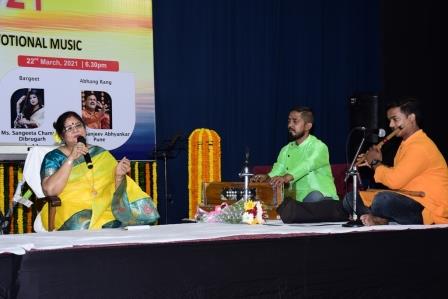 This festival will continue till 22nd March.

Sufi Music is arguably one of the best known mystical forms of devotional music. Having its origin in modern-day Iran and Afghanistan, Sufism spans almost half the world from the plains of Africa to the eastern coast of India and onward to Indonesia.

On the inaugural evening, the first programme was Bibhu Bandana by Dr. Sangita Gosain. Bibhu in Odia translates to lll powerful, omni present and the supreme Lord.

Her flawless Odia traditional Bhajana engrossed the audience till the end. She was accompanied by Ajaya Kumar Dash in Harmonium, Dushmanta Kumar Parida in Tabla, Rudra Prasad Parida in Flute and Budhanath Swain in Majira.

Last presentation of the evening was Music of the Masters by Anadi Mishra. Sufi music is the devotional music of the Sufis, inspired by the works of Sufi Masters, like Rumi, Hafiz, Bulleh Shah, Amir Khusrow and Khwaja Ghulam Farid.

His presentation in the inaugural evening was superb and melodious which was appreciated by the audience. He was accompanied by Jeevan in Keyboard, Hari in Tabla & Dholak, Ajaya Kumar Dash in Keyboard, Rama Krushna Baitharu in Octapad, Sumanta Moharana and Milan Kumar Panda in Chorus Singer.

The event was coordinated by Rajashree Patra and the programme was compared by Isha Dwivedi.