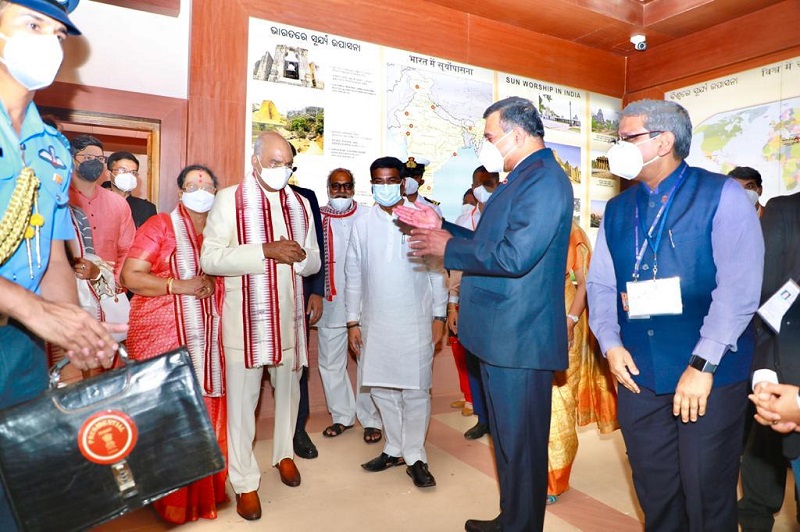 Upon his arrival, the President was accorded a warm welcome by Union Petroleum Minister Dharmendra Pradhan.

The President took a round of the interpretation centre and appreciated the efforts of IndianOil in Protecting, Preserving and Promoting India’s glorious past.

The President also praised the modern amenities being provided to the tourists at the temple complex.

On this occasion, Dharmendra Pradhan thanked the President for taking time out of his busy schedule and visiting the Interpretation Centre at Konark which has been developed as a new-age museum backed by different means of communication to aid and stimulate the discovery process while enhancing the visitor’s intellectual and emotional connect to the site.

S M Vaidya expressed his profound gratitude towards the President.

Highlighting the corporate agenda of IndianOil, he said that a robust social quotient and care for the community & heritage has always been the focus of Team IndianOil.

Built at the cost of Rs 50 crore, the Konark Interpretation Centre was inaugurated by Dharmendra Pradhan on 1st April 2018.

As the Sun Temple stands testimony to our centuries-old heritage, an urgent and pressing need was felt to have world-class Interpretation Centre better appreciate the craft and heritage of this epitome of beauty.

This prompted The IndianOil Foundation (IOF), to take up the cause of creating world-class infrastructure facilities. IOF’s pioneering work has substantially revamped and spruced up the entire complex.

The world-class Interpretation Centre is spread across eight acres.