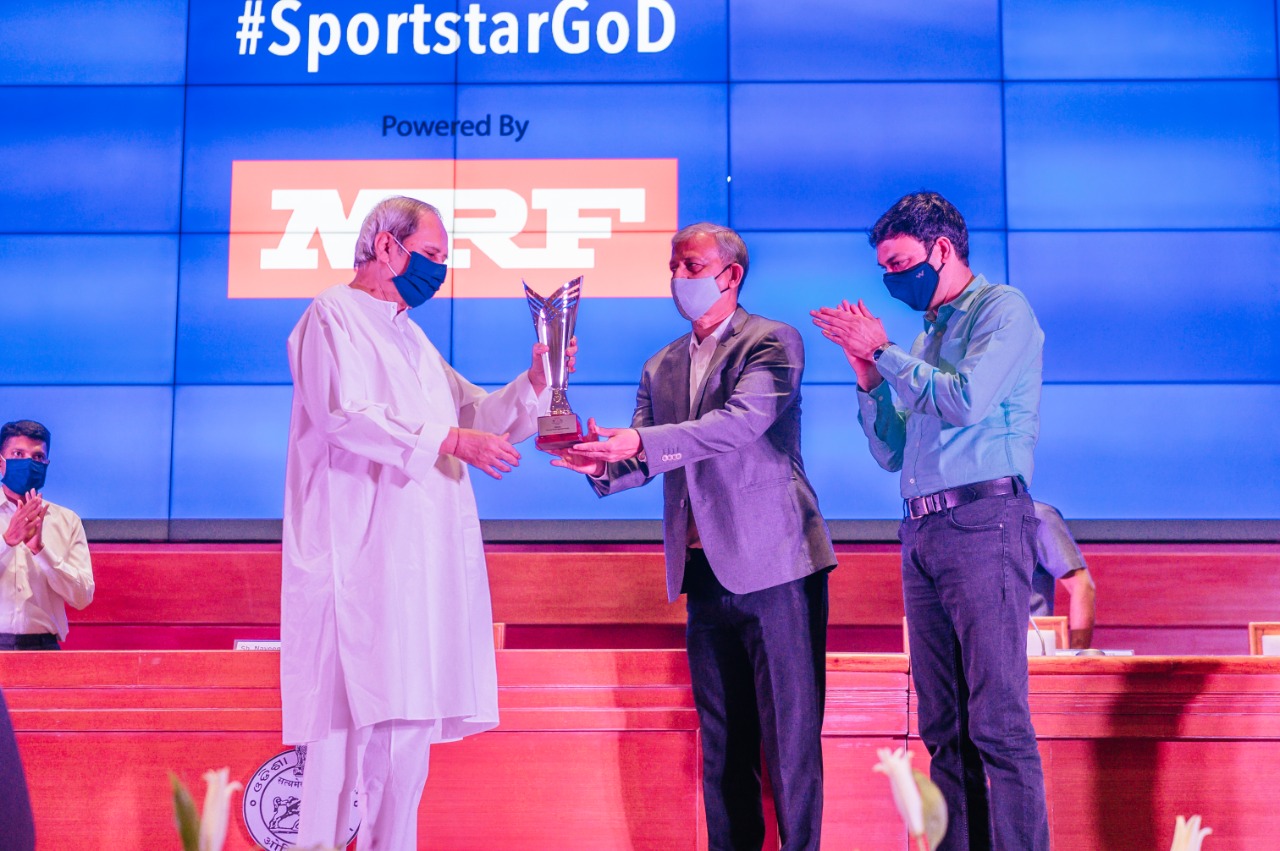 
Bhubaneswar: In yet another landmark achievement for the State, renowned sports magazine Sportstar today honoured Odisha with Decade’s Best State for Promotion of Sports for the period from 2011 to 2020.

Odisha received the Sortstar Aces Award that honoured the Giants of the Decade.

Renowned Hockey star M M Somaya handed over the award to Chief Minister Naveen Patnaik at a special function organised at the convention hall of Loka Seva Bhawan glittered with eminent sports persons of the country.

The Chief Minister further said that whether it’s disaster management or it’s Covid management, we have faced every challenge boldly, come out with flying colours, and have set new benchmarks.

Accepting the award on behalf of the people of Odisha, the CM said that it’s indeed a moment of great pride for us in Odisha.

Thanking the Jury headed by Sunil Gavaskar for choosing Odisha as the best state for promoting sports, the Chief Minister said that for generations in India, Sportstar was the window to the world of Sports.

It has been a source of inspiration and motivation for decades before the era of television and internet, he added.

Expressing his happiness over Sportstar’s continuing its rich tradition of promoting and recognizing sporting achievements in India, he wished the Sportstar group the very best in the coming years.

He further said that Sports has a major role in building a healthy and disciplined society. The youth have to be guided to productively utilise their energies and make them well-rounded personalities.

With this vision, we have been pro-actively supporting sports across the State, he added.

Speaking about the success of Asian Athletics 2017 within just 90-days’ time period, he said that Odisha has now become famous for its flawless conduct of national and international sports events, even at a short notice.

He further said that we have organized the Men’s Hockey World Cup 2018 and will be hosting the next edition as well in Bhubaneswar and Rourkela in 2023.

“Odisha is building the largest Hockey Stadium in the country in Rourkela for the Hockey World Cup. We are also building India’s first indoor athletics track. We will be probably the only State to plan for the indoor sports halls and fields across all the urban local bodies. The project is to be launched shortly and will be completed by next year,” he announced.

He said that Odisha has started the unique partnership model with the corporates and eminent sports persons to start High performance centres in various sports disciplines.

Kalinga Stadium sports complex is emerging as a major destination for sports in India. Recently, the Indian Javelin team has camped in the Kalinga Stadium for their Tokyo Olympics preparation, he added.

He further said that we have also launched large scale grassroots programs. In Sundargarh district, which has produced many international hockey players, we are going to construct synthetic hockey turfs in every block of the district, he informed.

Expressing high hopes on future of sports in Odisha, he said that we are ambitious about our sports programs for the youth and we would like to create the best infrastructure and provide top-class coaching for our sports persons.

He said that the jury considered the award for Odisha on three key areas. They are the ability to harness talent of the sports persons with super infra facilities, the High performance centres with partnership of industry and sports persons, and ability to organise international events.
In his welcome address, Ayan Sengupta, Senior editor of the Hindu Group said that Odisha has ushered in a revolution in sports in the past decade.

He said that ace cricketer Sunil Gavaskar was highly impressed with the performance of Odisha.
CEO of Hindu Group L. V. Naveneeth thanked the Chief Minister and Team Odisha for promotion of sports and said that the Starsports will be with Odisha for building a greater sporting future.

Veteran Sportspersons Sunil Gavaskar, Baichung Bhutia, Viswanathan Anand, Aparna Popat—all sent their video message for the programme. They all congratulated for the award and appreciated the efforts Odisha has made in championing the cause of sports.
A video on the sporting efforts and events in Odisha was screened.
Among others, Sports Minister Tusharkanti Behera, Vetrearan Hockey star Dillip Tirkey, Sports Principal Secretary Visha Dev, Secretary to CM 5T V. K. Pandian and other senior officers were present.