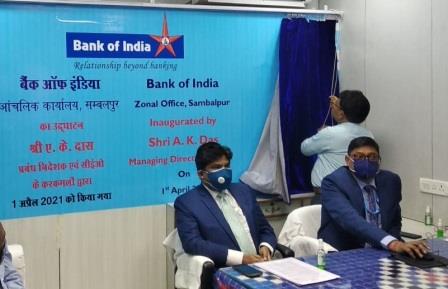 
Sambalpur: Bank of India has inaugurated its 3rd Zonal Office at Sambalpur in Odisha. The Sambalpur zone commenced its operations on 1st April 2021.

The branches of the Bank were earlier controlled through two zonal offices, one at Bhubaneswar and the other at Keonjhar.

Now after the restructuring in the administrative setup, the new Zonal office at Sambalpur shall strengthen the Bank’s administration and thereby its branch expansion and business in the western part of Odisha.

With the opening of Zonal Office at Sambalpur, it will accelerate the growth of SME and agriculture in the areas covered by the Sambalpur Zone.

Bank of India will now have 3 Zonal Offices with a wide network of 254 branches in Odisha.

Aurobinda Mishra has been appointed as the 1st Zonal Manager for Sambalpur Zone.