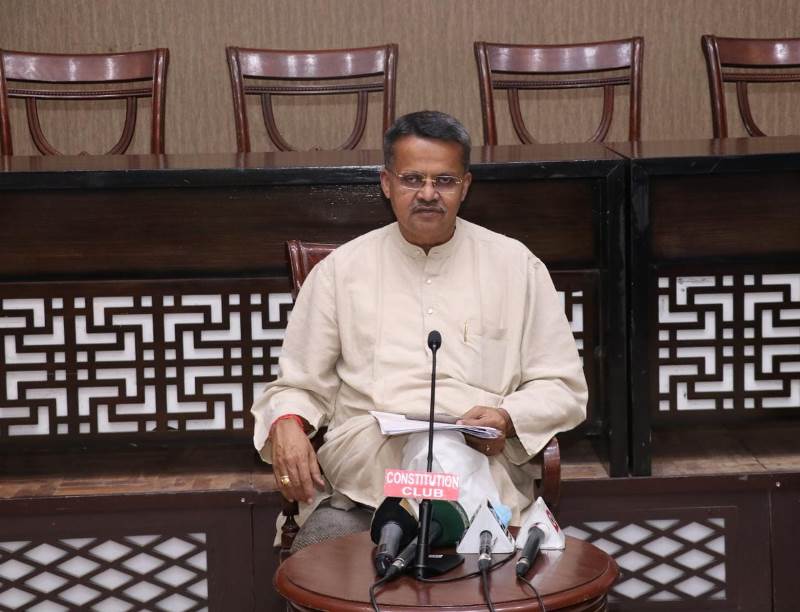 The event marking the release of the Hindi version has been organised by Harekrushna Mahtab Foundation. The book has been translated into Hindi by Shankarlal Purohit, informed Bhartruhari Mahtab.

Dr. Harekrushna Mahtab wrote the book ‘Odisha Itihaas’ in Ahmednagar Fort Jail, where he was imprisoned for more than two years during 1942-1945. The book gives an elaborate description of formation of Odisha. It also highlights the amalgamation of princely estates into one state.

‘Utkal Keshari’ Dr. Mahtab had served as the first Chief Minister of Odisha from 1946 to 1950 and is known as the architect of modern Odisha. His rousing thoughts have not only inspired Odisha but the whole country.

Earlier available in both Odia and English language, the Hindi version of the book ‘Odisha Itihaas’ will reach a larger cross section of the country and provide indepth information on the merger of Princely states and making of greater Odisha.

The publication is also a true tribute to the souls who have scarified their lives in the freedom movement of India. The occasion is happening at an opportune moment as we celebrate Amrit Mahotsav, commemorating the 75th anniversary of India’s Independence.

A brief write-up about the book:

History of Odisha was written during 1942-46 when Dr. Harekrushna Mahtab was behind bars in Ahmednagar Fort along with other Congress Working Committee members. There were 12 Congress stalwarts and six of them indulged in literary activities.

Other than writing a novel “Pratibha” in Odia and number of poems, Mahtab wrote the History of Odisha , both in English and Odia. It was painstaking effort of two years, toiling for 12 hours each day. This is the first book of its kind which depicts documentary evidences of the past, narrates facts methodically and is written without any bias or conjecture.

In the foreword Dr. Mahtab had written that whatever was written before, to his surprise, was of hearsay, folktales and first hand impression. Some were not complete. It was his endeavour to learn more about Lord Jagannath that led him to study more on Odisha which forced him to collect various materials from different quarters. He utilised his time fully for research.

Later, when new materials of historical importance came to light, he methodically probed its veracity and after finding it true included the same in its different editions.

No doubt, Dr. Mahtab’s History of Odisha is the best documented and authenticated book on Odisha which starts with mention of Mahabharat and goes till 1948, the merger of Princely states and making of greater Odisha.