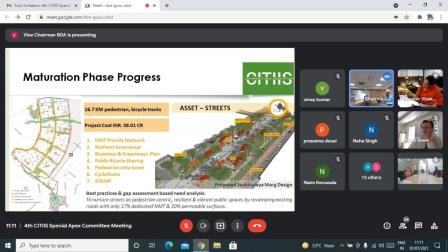 
Bhubaneswar: The Fourth Special Apex Committee led by Kunal Kumar, Joint Secretary and Mission Director (Smart City Mission), for validation of Maturation Phase has approved the Bhubaneswar Active (B-Active) Project of the city under the City Investments to Innovate Integrate and Sustain (CITIIS).

After the approval, B-Active Project of Bhubaneswar will move forward to the implementation phase.

It was held virtually under the chairmanship of the Joint Secretary and Mission Director (SCM) MoHUA, on July 1.

Presentation for Bhubaneswar’s B-Active Project was made under the guidance of Chief Executive Officer of Bhubaneswar Smart City Limited (BSCL), Sanjay Kumar Singh.

AFD Country Director Bruno Bosle congratulated Team Bhubaneswar on the successful preparation of all deliverables of the Maturation Phase and the approach of the various components of the project.

The Joint Secretary and Mission Director (SCM) MoHUA also congratulated CEO BSCL and wished best to the team for successful implementation of the project.

Bhubaneswar’s B-Active (Bhubaneswar-Active) proposal was submitted by BSCL under the theme of Public Open Spaces. It was selected as one of the 12 city proposals under CITIIS Challenge Programme in February 2019 at the Second Apex Smart City CEO’s conference held in Delhi.

Subsequently, a tripartite agreement was signed on March 5, 2019 for the CITIIS Programme between MoHUA, Government of Odisha and BSCL. The city will get Rs 79.30 crore in grant in phases.

CEO BSCL Sanjay Kumar Singh said, “With this approval, now BSCL will try to implement all the components of the project with a more structured way in order to achieve the objectives of the B-Active Project.”

The intention behind B-Active project is to resolve the issues associated with service delivery to improve the quality of public open spaces across 2,470 acres, encompassing parts of the planned area and the Old Town area of Bhubaneswar City.

While addressing the issue of declining levels of physical activity, a Smart Active Living Strategy is proposed to maximize the use of the open spaces for different assets (components) in the city, including Streets, Water, Parks & Open Spaces, Sports & Playgrounds, and Heritage.