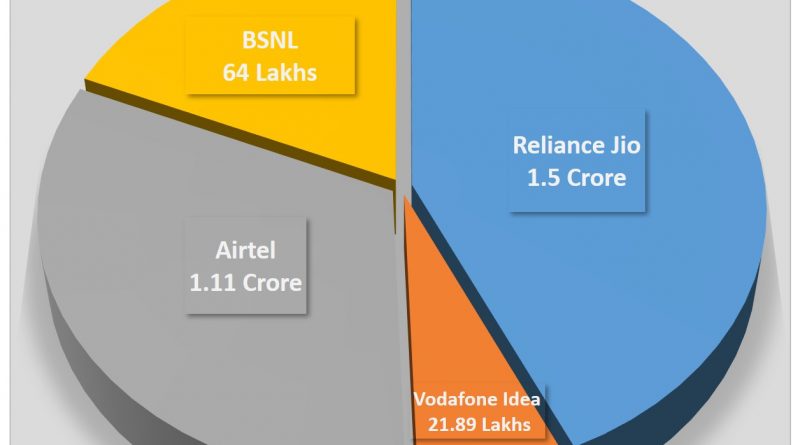 Bhubaneswar: Further consolidating its leadership position as the most preferred and No. 1 digital service provider in the state, Reliance Jio has added highest 2.53 lakh new mobile subscribers in Odisha, in the month of June 2021, as per the latest telecom subscriber data released by Telecom Regulatory Authority of India (TRAI).

With this, the total number of Reliance Jio subscribers in Odisha has reached nearly 1.5 crores (1,49,94,892), the highest ever by any single operator in the state, with over 43% subscriber market share.

It is worth mentioning here that Reliance Jio has been expanding its all 4G mobile network across the state and connecting several hitherto unconnected remote areas across the state, bringing delight for the people, especially students and teachers attending online classes from geographically challenging regions including the districts of Kandhamal, Gajapati, Jharsuguda, Rayagada, Koraput, Keonjhar and Sundergarh.

Jio has also recently successfully completed deployment of the additional 20 MHz spectrum acquired in the recent spectrum auctions, across Odisha, further enhancing network, speed, and subscriber experience in the state.

Nationally, Jio also dominated subscriber addition in June 2021 as it added the highest 5.5 million mobile subscribers in the month.

Jio has consistently been adding highest number of new subscribers every month over the last few years, powered by its largest true-4G network, rapid expansion into hitherto unconnected areas and affordable rates along with seamless high-speed internet across the state.