These days many celebrity couples in the entertainment industry are ready to tie the knot. While Bollywood actor Vicky Kaushal and actress Katrina Kaif are going to get married on 9 December, TV actress Ankita Lokhande is also going to get married with her fiancé Vicky Jain this month.

For this the actress’ pre-wedding rituals have also started. Even the wedding card of both of them has also surfaced on social media.
Meanwhile, the fans are now eagerly waiting for the wedding of their favorite actress. Amidst the pomp of marriage, a big news related to actress Ankita Lokhande has come out. The actress was suddenly admitted to the hospital last night. Actually, she was taken to the hospital after she got injuries on her leg. However, she has been discharged from the hospital. But the doctor has advised her bed rest for the time being.
Antikta has also shared a picture of herself, in which her leg is seen bandaged. 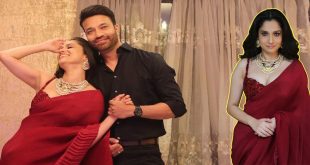