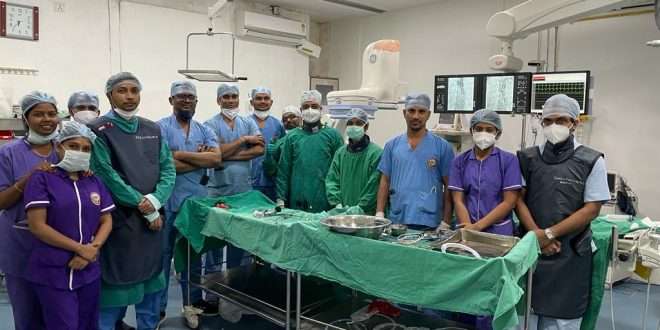 
Bhubaneswar: A woman, afflicted with a congenital cardiac defect known as Coarctation of aorta, has been successfully treated at the Institute of Medical Sciences and SUM Hospital here recently leading to her complete recovery.

The 34-year-old woman from Jajpur district, who had been suffering from hypertension for a long period and was on medication, had been treated at several places without any relief before coming to IMS and SUM Hospital.

The patient was treated by Dr. Dibya Ranjan Behera under whose leadership a team of experts conducted the complicated surgery in the hospital cath lab while stents were placed in the aorta to expand the same. It led to normal flow of blood from the heart.

“This condition often leads to problems like hypertension, brain hemorrhage and kidney ailments and the patient experiences pain in both legs,” Dr. Behera said.

The patient is no longer required to take medicine to control the blood pressure and is doing fine, he said adding the treatment was conducted under the Biju Swasthya Kalyan Yojana (BSKY).