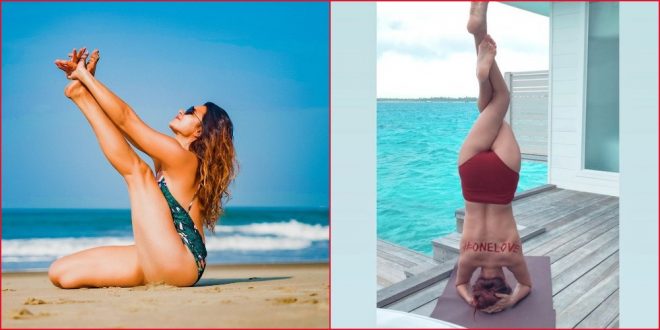 
Aashka Goradia is a well-known name of TV. She has kept a distance from the TV industry for some time now. Aashka Goradia is also in a lot of discussions on social media about her boldness. It is also seen that Aashka often keeps posting pictures and videos of her yoga on Instagram.
Along with this, she is also seen giving fitness tips to her fans. Recently, Aashka Goradia has shared a hot photo of her on social media. After which she is seen being trolled again.
Aashka Goradia has posted her topless picture on her official Instagram account. However, in this picture, Aashka is seen doing yoga and her back side is visible. #OneLove is written on her back. “It’s funny how the people who know you the least, talk about you the most. Down right comical when they think you are unaware. My foot in the sky and head on the ground… for this whole life. My back is strong AF … so talkers/haters get a life.”
Let us tell you that on these pictures of Aashka Goradia, not only her fans but also the stars are seen supporting her. Supporting Aashka, many actors from the TV industry commented. Adah Khan, Mouni Roy, Shruti Pathak, Molly Dave among others have expressed their love by posting emoticons on their posts.