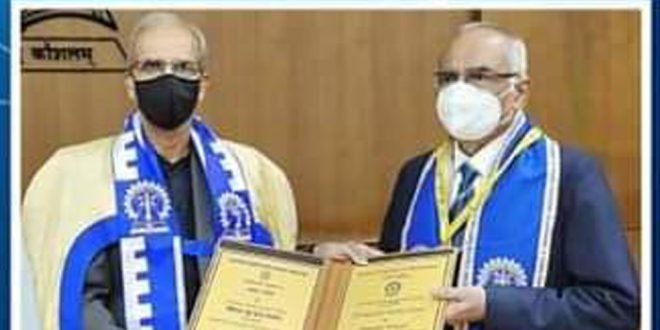 
Bhubaneswar: Prof. (Dr.) Damodar Acharya, Chairman of SOA’s International Advisory Board and former Chairman of the All India Council for Technical Education (AICTE), was presented with the Distinguished Alumnus Award by his alma mater, Indian Institute of Technology, Kharagpur recently.

The award was presented at an event at IIT-Kharagpur to Prof. (Dr.) Acharya for his outstanding achievements and contributions in the field of education.

He is the first alumni of IIT-Kharagpur to become its Director and also the first Odia to take up the prestigious responsibility. He contributed to the development of the institute immensely during his tenure from 2007 to 2012.

Prof. (Dr.) Acharya was also an alumni of the Regional College of Engineering, Rourkela (presently NIT) where he did his B.Tech and is recipient of the Distinguished Alumnus Award from that institute as well.

The first Odia to serve as chairman of the All India Council of Technical Education (AICTE) from 2005 to 2007, he was also the first from the state to be Director of the Central Board of the Reserve Bank of India (RBI).

He also served as the founding Vice-Chancellor of the Biju Patnaik University of Technology (BPUT) in Odisha between 2002-05.

Prof. (Dr.) Acharya greatly contributed to the establishment of the Bhubaneswar campus of IIT-Kharagpur and subsequently IIT-Bhubaneswar and the Institute of Chemical Technology (IndianOil Odisha campus) in Bhubaneswar. He has been heading SOA’s International Advisory Board since 2013.

Two of his students at IIT-Kharagpur, Prof. K. Radhakrishnan, former Chairman of ISRO, and late Gopal Chandra Mitra, former Secretary in the department of Works, Government of Odisha, had received the Distinguished Alumnus Award earlier. Prof. Radhakrishnan, presently Chairman of the Board of Governors, IIT-Kanpur is a Padma Bhushan awardee while late Mitra was conferred with the Padma Shri. 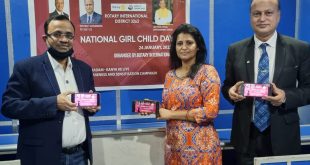