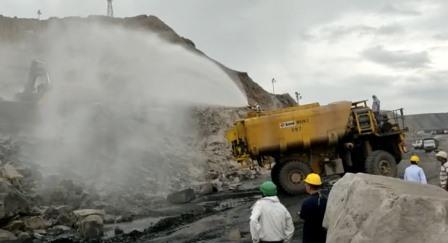 
Bhubaneswar: Struggling to cope with the acute coal shortage in Odisha that continues to plague local industries, the Association of Industrial Entrepreneurs of Bhubaneshwar (AIEBA) has written to Chief Minister Naveen Patnaik seeking his urgent intervention in the resumption of adequate coal supplies.

The ongoing crisis has deeply affected the manufacturing sector and threatens their survival. A respite from the crisis would help ward off any shutdown of the state’s industries and enable sustainable industry operations.

In a letter to the Chief Minister, Ali Kishore Patnaik, President, AIEBA, while acknowledging the government’s progressive policy reforms and support towards industries, also sought to draw attention towards the continued coal shortage facing them. Owing to the curtailment of the coal supplies and rakes, the viability of industries thatform a significant part of the state’s business landscapedriving employment and revenue generation is now seriously threatened.

He further highlighted that Captive Power Plants (CPPs) based industries in Odisha were facing alarmingly depleted coal stocks of only 2-3 days as compared to the prescribed levels of 15 days. On the other hand, the situation of the power sector has drastically improved to 9-10 days of stocks.

The CPPs, whichare heavily dependent on coal as their primary raw material, are unable to run smoothly due to the current situation. Surprisingly, despite the ongoing crisis, Coal India Limited/Mahanadi Coalfields Limited has once again issued directives this week to divertcoal supplies from the Non-Power Sector to the Power Sector.

The decision to divert coal supplies from major coal bearing areas in Odisha will further take a toll on thehampered manufacturing sector and deprive the already ailing Non-Power Sector from getting coal, heavily impeding the industrial operations.

The letter further brings to attention that since August 2021, the CPPs have been receiving only 40-50% of the required coal supplies needed for them to function optimally, creating a backlog of over 1500 coal rakes as most of the available coal rakes are being diverted away from CPPs.

This struggle to receive uninterrupted coal supplies for continued operations has brought the industry to a veritablestandstill, leaving them with limited time to devise mitigation plansforsustained operations. Due to the aforesaid reasons, the operational power plants are forced to operate at drastically reduced power generation levels, creating a huge risk of closure.

The AIEBA chief in his letter alsoemphasised on the crucial role the manufacturing sector has played in the socio-economic development of Odisha. However, the current situation has brought the CPPs to a grinding halt and resulted in the increased prices of finished products that is affecting the end consumer. He reiterated that the state’s booming manufacturing sector is at risk if the current situation remainedunaddressed.

The intermittent coal supplies to CPP-based industries in Odishamadethe very survival of local industries a challenge. This could cause cascading effects, in terms of loss of employment of over one million people, closure of ancillary industries and MSMEs, loss of revenue & state exchequer accounting to over Rs. 15,000 crore, forex loss due to loss of exports and hurt the sentiments of global investors.

Seeking government supportin this matter of critical importance, the AIEBA President requested the Chief Minister’s intervention in resolving the crisis,to resume the coal and rake supplies from the MCL towards meeting 100% coal requirements for CPP-based industries in Odisha.

He requested that the demands of the local industries be prioritised and met through the State’s own coal production before being supplied to other areas. This timely action could spur growth opportunities in the state and create millions of jobs while bringing in revenue.