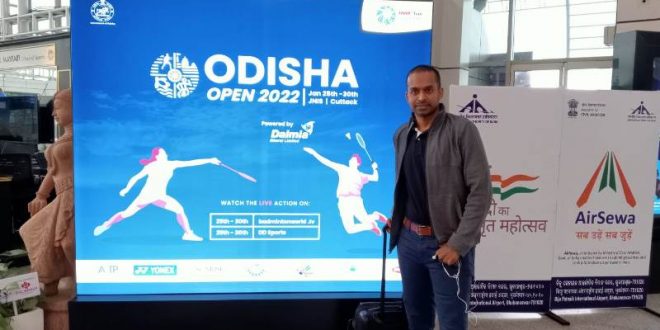 
Bhubaneswar:  Odisha Open Super 100, the first-ever international badminton tournament of Badminton World Federation at Odisha soil is all set to be kicked off at Jawaharlal Nehru Indoor Stadium, Cuttack on Tuesday.

About three hundred fifty players from as many as seventeen countries are participating in this tournament.

While the preparation of this mega tournament is almost ready, players had their warm up practice sessions at Cuttack on Monday. The tournament, a BWF event, is being organised with the joint efforts of state sports and youth service department, Badminton Association of India and Odisha State Badminton Association.

The tournament will be played in four courts at JNIS Cuttack. The venue is absolutely made ready to host the first ever international badminton event at Odisha. Since the tournament is played as per the Covid guidelines, therefore no spectators will be allowed to enter into the stadium. Covid tests of all players, technical officials, volunteers have been conducted, after their arrival at Bhubaneswar and only those found negative will be allowed to enter into stadium premises.

Significantly, while Odisha has earned a name in international circuit for organising international sports event successfully, mainly in the fields of hockey and athletics etc., the Odisha Open Super 100 is all set to add another feather to its cap.

While all out efforts are made by the organisers to make the tournament a grand success, State sports minister Tushar Kanti Behera on Monday expressed his good wishes for the success of the tournament.

“It is a matter of pride for our state to host such a prestigious sports event.” Sports minister Tushar Kanti Behera said. “I hope each members of the organising team will exhibit their same zeal and enthusiasm, which they had shown during hosting of other international sports events in the state, for making this tournament a grand success,” Behera added.

According to the officials, the matches would be played in five categories, i.e. men’s singles, women’s single, men’s doubles, women’s doubles and mixed doubles. “About three hundred fifty players from as many as seventeen countries of the Globe are competing in five events in this tournament, in which there has been seventy five thousand US dollar cash prize will be given to the winners,” said Girish Nattu, Deputy Chief Referee of this tournament.

“I am glad that organisers have made excellent arrangements to make this international badminton tournament a grand success and I am sure many more such tournament will come to Odisha in future days,” Nattu added.

“This tournament is obviously going to add another landmark in Odisha’s glorious sports journey and take one step closer to Chief Minister Naveen Pattnaik’s dream to convert state capital Bhubaneswar as the sports capital of the country,” said Nileen Kumar, “I am extremely thankful to the department of sports and youth services, for extending all support to make this tournament a grand success,” Nileen Kumar added.

Later in the day, legendary Badminton coach, Pullela Gopichand arrived in the city and interacted with the players practising at JN Indoor Stadium and encouraged them for their events ahead.