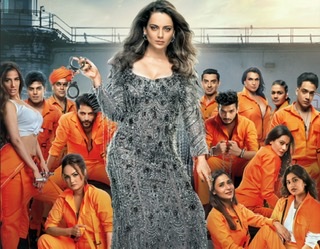 
MX Player – India’s entertainment super app & streaming giant ALTBalaji bring viewers a captive reality show unlike none other with Lock Upp: Badass Jail, Atyaachari Khel. Highlighting the tough journey of famous personalities who are now inmates in the biggest and most fearless reality show, hosted by the Queen of Bollywood – Kangana Ranaut – this intriguing homegrown format is now streaming live on both platforms. Kangana will make grand appearances every Saturday and Sunday night, making it a spectacular weekend!

As promised, all the contestants are controversial celebrities. From Munawar Faruqui to Poonam Pandey, here’s the list of contestants sentenced for 10 weeks.

The Queen of Bollywood Kangana Ranaut shared, “I am glad that my digital debut is happening with a unique and interesting concept of ‘Lock Upp’ on both leading OTT platforms, ALTBalaji & MX Player. The Czarina of entertainment Ekta Kapoor is a force to reckon with and has always been a staunch support! The viewers will see the lives of 13 controversial personalities turn upside down in my Badass Jail where they will play the atyaachari khel!”

Karan Bedi, CEO – MX Media said, “With Lock Upp, we are ushering in a new era for reality shows that will set the benchmark for the genre. The show is based on a never-seen-before concept with a fascinating line-up of stars as contestants with twists and turns that will keep audiences hooked to their screens. We can’t wait to know what our viewers think about this first-of-its-kind reality show on OTT.”

Speaking about launching Lock Upp, Content Czarina Ekta R. Kapoor, said: “India’s biggest & the most fearless reality show Lock Upp hosted by the uber-talented and dynamic Kangana Ranaut is going to blow everyone away! I am happy to support and congratulate Kangana on her OTT debut. Lock Upp has been staged on a humongous scale and has all the essentials that make it a completely entertaining reality show. The distinct ideology of the show is fantastic, and I am confident that it will establish a new benchmark for reality shows in India and the world. It’s a proud moment that MX Player has joined hands with ALTBalaji. I am positive that the team will create magic with Lock Upp and that it will be a runaway success!”

Lock Upp is now streaming live on MX Player & ALTBalaji, where in the audiences can directly interact with their favourite contestants from the show. In a never-seen-before format, the viewers will have the power to punish or award their chosen contestants and even play ‘Khabri’ to some.

Stream Lock Upp for free on MX Player and ALTBalaji or subscribe to MX Gold and watch this intriguing series along with loads of other content ad-free for Rs 199 a year.