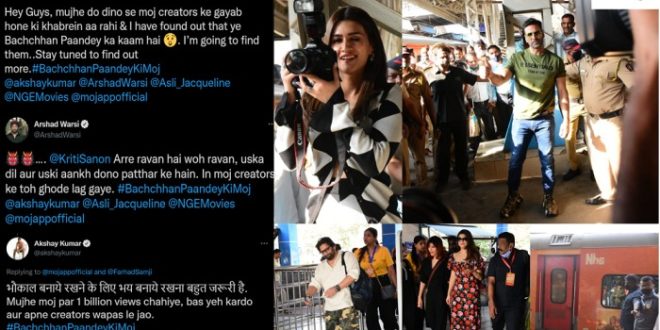 
Looking at the trailer of Sajid Nadiadwala’s Bachchhan Paandey starring Akshay Kumar, the janta knows that if somebody messes with him, he will make sure of showcasing his ‘Bhaukaal’. While out-of-the-box feats, to garner the limelight, are something everyone is familiar with, the trajectory of the movie promotion has taken a surprising turn today spreading some waves of fear.

If no one knows about it, here is the TLDR version. Twelve popular Moj creators were reported missing last seen on Saturday (#MojCreatorsNotFound) and the star cast, Kriti Sanon, Arshad Warsi, and Jacqueline Fernandez, while staying in the character of the roles they play in the movie, also hinted an element of doubt towards BachchhanPaandey. This has sent all social media platforms into a tizzy, especially the 160 million users on the short video platform, Moj. The missing creators include Bhavi, Himanshu, Sohail, Rashi, Surbhi, Pranavi, Khwaish, Sriish, Sameeksha, Simran, Sohail, and Prasad.

Akshay plays the role of a stone-eyed and stone-hearted gangster, and staying in character, Akshay Kumar has made an announcement today demanding 1 billion views on Moj for the hashtag #BachchhanPaandeyKiMoj in exchange for the return of the content creators he has held for ransom. Although the fumes of scare consumed the netizens, Akshay Kumar aka Bachchhan Paandey publicly announced the reason behind this capture. Here’s what he had to say, “Bhaukaalmachgayahai! I have kidnapped 12 Moj creators. Kyun? Bas humne kidnap kiyamazzaaaya, torture kiya aur mazzaaaya. Inkisalaamatichahte ho tohjyadalappartapparkiyebegair 1 billion+ views deliver karo #BachchhanPaandeyKiMoj par kaltak! 1 billion+ views de jaao, creators ko le jaao.”