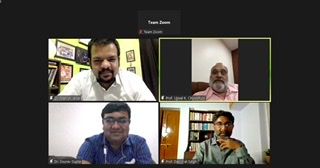 
The Global Media Education Council (GMEC) organized a webinar to pay tribute to Internationally renowned Educationist-Philosopher Paulo Freire on his centenary. The webinar was a part of the Global Communication Education Conclave which will hold 75 webinars in commemoration of India’s 75th year of independence.

The programme started with a felicitation & conferring of Life Time Achievement Award to Prof Pushpendra Pal Singh, veteran media educator and Public Relation Practitioner who is currently the Director of I & PR, Government of Madhya Pradesh. The award was conferred upon Prof Singh by Prof Mohammad Shahid Ullah, Professor, Department of Communication & Journalism, Chittagong University, Bangladesh who was the Chief Guest of the evening and in the presence of Prof Ujjwal Kr Chowdhury, Daffodil International University, Dhaka & President of GMEC.
Prof Shaid Ullah in his address as the Chief Guest elaborated on the life and works of Paulo Freire. He described the background to Freire’s Pedagogy of the Oppressed and its dynamics in the society. He also mentioned about Agusto Boal’s application of Freire’s pedagogy in Theatre.
Dr Sourav Gupta, Senior Assistant Professor, Department of Journalism & Mass Communication, Central University of Odisha was the key note speaker. Dr Gupta’s deliberation was titled, Pedagogy of the Oppressed & Development Communication-Re Thinking Challenges & Possibilities on Freire Centenary. Dr Gupta explained that the roots of the Pedagogy lies in the Critical Thinking. He described how Freire characterized oppression with oppressor and oppressed and proposed alternatives to the oppressive norms of the society. Dr Gupta traced the development discourses in third world countries and the transformation of media in a capitalistic economy and referred to the concept of mind construction of Noam Chomsky. He cited the contemporary efforts in applying Freire’s pedagogy like Augusto Boal’s Theatre of the Oppressed, Community based Theatre and Internet Radio efforts at tribal areas like Koraput.
Prof Dev Vrat Singh, Professor, Department of Mass Communication, Central University of Jharkhand was the Chairman of the Webinar. In Chair’s remarks, Prof Singh reflected on the communication pattern in the classrooms and the teacher student relation in the light of Freire’s pedagogy by referring to traditional concepts of Guru Bramha.. and Atma Deepa Bhava….