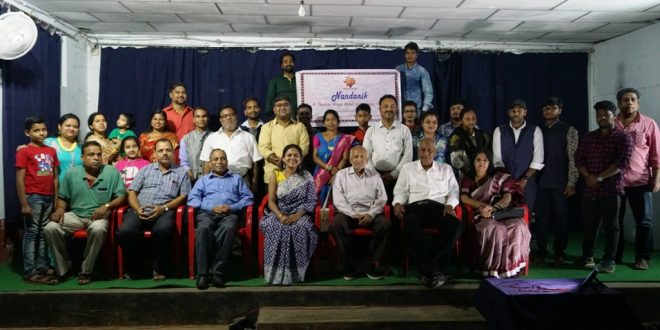 
Koraput: Nandanik, a theatre group based in Koraput, Odisha has been celebrating the World Theatre Day in Koraput since 2014.

On Sunday, Nandanik organized a programme at Tribal Museum, Koraput on this occasion.

Dr Sourav Gupta, Creative Director of Nandanik explained the significance of World Theatre Day and informed that in 1961 UNESCO had declared 27 March as World Theatre Day. Every year a noted theatrician gives the WTD message. In 2022 the message was given by Peter Sellars, Theatre director from USA which was translated to Odia by eminent Indian director Shri Subodh Patnaik. The message in Odia was read out by Saumendra Swain, Treasurer of Nandanik. It focused on returning to Theatre in the post pandemic era.

Abhaya Kr Das, a member of Nandanik was felicitated for being selected for the CCRT Young Artist Scholarship by the Ministry of Culture, Government of India. He has received the scholarship for a proposed research project titled, Animal Characters in Folk Theatre of Odisha under the guidance of Dr Sourav Gupta. A T Sunny, another member was also felicitated for qualifying NET-JRF.

Legendary playwright Henrik Ibsen’s famous play, An Enemy of the People was staged by Nandanik in Odia. The script was adapted to Odia by Dr Sourav Gupta & Saumendra Swain and directed by Sourav Gupta. The set & lighting was done by Saumendra Swain and Clement Nayak was in charge of music operation. Make up woman was Monideepa Gupta. The actors were Sourav Gupta, Monideepa Gupta, Sitangshu Rath, Ajaya Edding, Samir Paikray and Sameer. The play revolves around a doctor’s belligerent efforts to save his town & its people from polluted water and how he gets cornered for saying the truth.