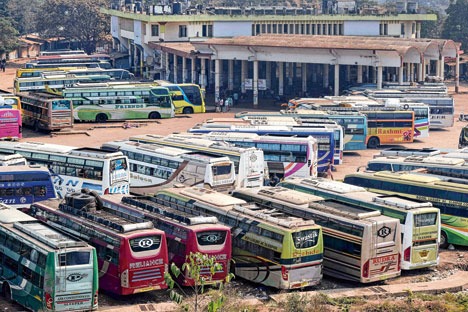 
Bhubaneswar: The bus fares in Odisha have been hiked in view of the rise in the fuel prices.

“In pursuance of Commerce & Transport (Transport) Department Notification and due to increase in per litre diesel price from Rs 98.40 as on 31.03.2022 to Rs 102.22 as on 18.04.2022, leading to price increased by an amount equal to Rs 3.82 in direct and Rs 4.05 in cumulative (including the carryover), the fare for stage carriages other than town buses plying within the State of Odisha shall be fixed at increased rate,” stated an order issued by the State Transport Authority (STA).

The new bus fares will be effective from April 18.

According to the new fare, the bus owners will charge 92 paise/km instead of 90 paise/ km. The express buses will charge 96 paisa/km against the previous rate of 94 paisa/km. Similarly, the deluxe and AC Deluxe fare has been increased to Rs 1.35/km and Rs 1.63/km.

The passengers were earlier paying a fare of Rs 1.59/km for travelling in Deluxe and Rs 2.47/ km for travel in AC Deluxe buses in the State.