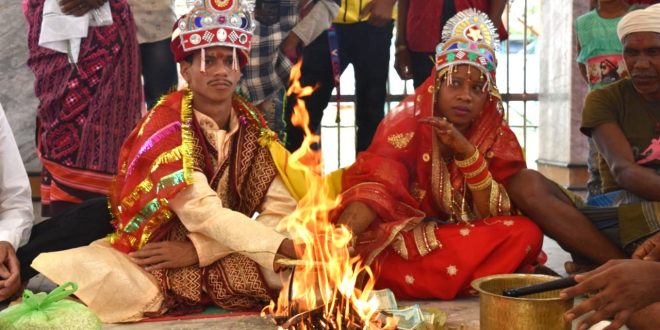 Ramdas was a member of banned CPI (Maoists) KKBN division for almost nine years before surrendering to police. He was from a poor family from Bijepur district of Chhatisgarh.  He has two sisters and one brother whom he  did not meet for more than ten years till Kalahandi police facilitated their meeting after his surrender. During one such meeting Ramdas’s father’s cataract surgery was arranged by police and during his recovery both Ramdas’s and Kalamdei’s family met and decided to go ahead with their  marriage. Kalamdei was also a member of BGN division of banned Maoists for almost a year before her surrender.

Knowing their desire to get married, initiative was taken by SP, Kalahandi under the guidance of DIG of Police (SWR) Koraput to arrange their marriage in the temple of Reserve Police Ground, Bhawanipatna. Marriage was solemnized on 22.04.2022 between Ramdas and Kalamdei Majhi in full fanfare by Kalahandi police and feast was organized by police at the temple premises where  family members of bride and bridegroom participated along with police and media persons.

The members of Maoists are hereby appealed to shun the path of violence and to make use of Government of Odisha’s Surrender and Rehabilitation policy and come and surrender with police to come into mainstream.