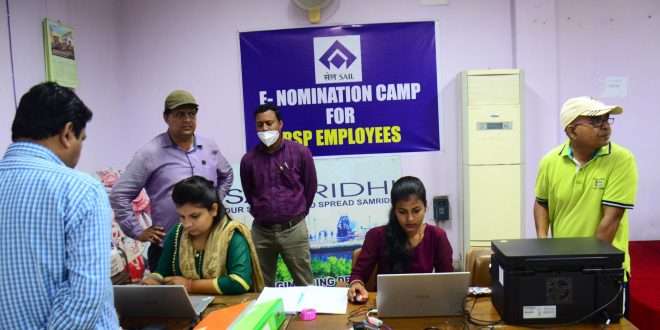 
An e-nomination facilitation camp for RSP employees was inaugurated by PK Satapathy, ED (P&A) in a function organized at the Town Engineering conference hall on Wednesday.

Satapathy expressed happiness over the Facilitation Camp and applauded the effort of the team associated with the project.

Notably, the Facilitation  Camp has been organized by Personnel department under the leadership of BK Kullu ,GM I/c (P&A) with the help of C & IT and  Finance Department.   In this camp the e-nomination of around 200 numbers of RSP employees per day shall be completed in all respect as per EPFO guidelines.

The camp shall operate from 6AM to 10 AM and 6PM to 9PM on all office days for minimum of three months. Similar type of camp shall be organized for the Odisha Group of Mines.

It is noteworthy to mention here that RSP is the first unit to start such a facilitation centre for its employees who are unable complete e-nomination in EPFO portal.