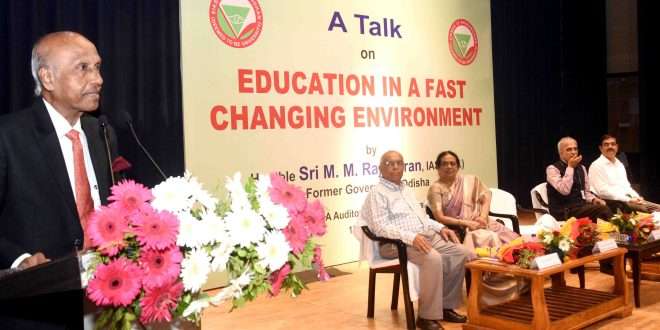 
Bhubaneswar: The teaching fraternity has a huge responsibility to mould the young people academically and intellectually while inculcating high moral values in them, former Odisha governor M.M. Rajendran said on Friday.

“Character building is important as it helps shape a nation and moral values need to be instilled in students in the educational institutions,” Rajendran, on a visit to the state, said while delivering a lecture at Siksha ‘O’ Anusandhan (SOA) here on the subject ‘Education in a Fast Changing Environment’.

Emphasising that teachers had a special responsibility in moulding students, he said the country today lacked role models. Many, whom people thought to be role models, have disappointed, he said adding people at the top often got into trouble because they lacked character.

“What you teach, you must practice so that you become role models,” Mr. Rajendran, whose memoirs titled ‘Service Uninterrupted’ was released by Odisha Governor Prof. Ganeshi Lal at a function held at the Raj Bhavan here on Thursday, said.

“What Swamiji said long ago holds true today as well,” he added.

Rajendran said students should realize that what they studied in schools and colleges did not make them educated.

“Education is a continuing experience which lasts a life time. When a student says I have completed my education it is not true. You have only got a degree, but learning is a continuous process.”

Stating that corruption had spread globally and in India as people with honesty were not encouraged, the former Governor said “people with integrity were often dismissed as simpletons who did not know how to use opportunity.”

“Ability may get you to the top, but it is character which will help you to stay there,” he said.

Praising Siksha ‘O’ Anusandhan, Rajendran said he was happy to know that the Deemed to be University was engaged in significant research.

“The university should live up to its name fully and develop more patents. You have got a good number of patents so far but it is possible to get many more in the future as it would bring much credit to the country,” he said.