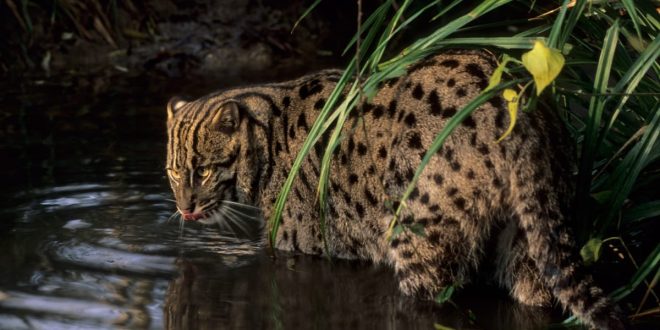 The total abundance of Fishing Cats in Chilika was found to be 176 with an estimated range of 131-237 individuals. This is the world’s first population estimation of the Fishing Cat that was conducted outside the protected area network.

The estimation was conducted in two phases. Phase-I was conducted in 2021 in the 115 sq km marshland present in the north and north-eastern section of Chilika and its surrounding areas. Phase II was conducted in 2022 in Parikud side along the coastal islands of Chilika. Both phases combined, a total of 150 camera traps were deployed with each staying in the field for 30 days. Thereafter, Spatially Explicit Capture Recapture (SECR) method was used to analyse the data.

“It was truly participatory in spirit since local fishermen and villagers of Chilika were the primary participants in this exercise. Without their support, the world’s first such population estimation outside protected areas on this globally threatened cat, would not have been possible,” says Susanta Nanda, Chief Executive Officer, CDA. “10 graduate and post-graduate students also volunteered during the exercise. Chilika Wildlife Division staff actively facilitated and participated in the population estimation. Such a participatory effort involving multiple stakeholders for studying this elusive and threatened species sets a wonderful precedent,” says Partha Dey, co-founder, TFCP.

Fishing Cats are globally threatened cats that occur in wetlands like marshlands, mangroves and flooded forests in major South and South east Asian river basins starting from Indus in Pakistan till Mekong in Vietnam and in the island nations of Sri Lanka and Java. They are found in 10 Asian countries but have remained undetected in Vietnam and Java since the last decade or so. “Wetlands in Asia are being lost at alarmingly rapid rates and proper data on their current status or even baseline data in many countries are missing. The status of many wetland species remains understudied and highly threatened. Tracking specialist species such as the Fishing Cat gives us an indication of what might be happening to these ecosystems, which are safeguards against climate change and droughts,” says Tiasa Adhya, co-founder, TFCP.

Earlier this year, CDA had declared its intent to adopt a 5 year action plan for Fishing Cat conservation in Chilika. “In collaboration with TFCP, we are soon going to share a Fishing Cat Action Plan that is socio-ecological in essence. We have already began an year long patrolling and monitoring program on the cat and its sympatric species. Along with upscaling it, we will promote sustainably and traditionally harvested wetland products to prevent wetland conversion, establish a rescue and rehabilitation centre, promote small scale experiential and educative wetland tourism, adopt habitat restoration programs as well as education programs,” says Nanda.