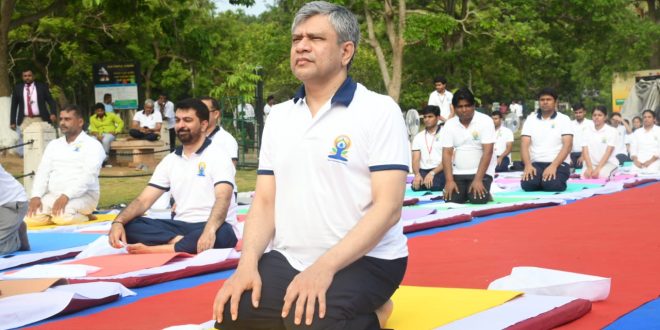 Rath Yatra 2022: Special trains to and from Puri for pilgrims


Union Railway Minister Ashwini Vaishnaw on Monday said Railway is planning to run special trains to and from Puri during Rath Yatra 2022 period for smooth travel and convenience of the pilgrims.

As Rath Yatra was organized without pilgrims since last two years due to Covid 19 protocols, Railway expects much more pilgrims will be gathered at Puri, this year.

The Minister attended the 8th International Day of Yoga at magnificent Sun Temple at Konark on Tuesday.More than two thousand five hundred people including various Central Government Organizations, students of various schools & colleges along with Yoga experts participated in the mega event held at Konark Temple, this morning.

Yoga is an ancient high ascetic practice originated in India that combines physical, mental and spiritual pursuits to achieve harmony of the body and mind. There are numerous benefits of practicing yoga which leads for humanity.

Remembering Swami Vivekananda who introduced the culture, tradition and heritage of the country in the whole world, Prime Minister Narendra Modi introduced Yoga in the whole world for the humanity. In, United Nations General Assembly in December 2014 decided to celebrate International Day of Yoga which was implemented world wide since 21st June, 2015.

Vaishnaw also said that the redevelopment works of Puri Railway Station will be a State-Of-The Art Station in a World Class Model.