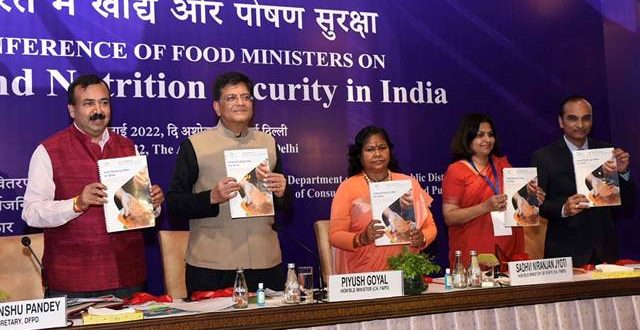 
Odisha has been adjudged the top ranked State followed by Uttar Pradesh at the 2nd spot and Andhra Pradesh at third amongst the General Category States in ‘State Ranking Index for NFSA’.

Among the Special Category states/UTs, Tripura stood first followed by Himachal Pradesh and Sikkim respectively. Further, among the 3 UTs where Direct Benefit Transfer (DBT)- Cash is operational, Dadra and Nagar Haveli & Daman and Diu is the top ranked UT.

Union Minister of Consumer Affairs, Food & Public Distribution, Textiles and Commerce and Industry, Piyush Goyal released the 1st edition of ‘State Ranking Index for NFSA’ during the conference of Food Ministers of States/UTs on ‘Food Nutrition and Security in India’ organized by Department of Food and Public Distribution here today. Ms. Sadhvi Niranjan Jyoti, Minister of State for Consumer Affairs, Food & Public Distribution and Rural Development along with Secretary DFPD, Sudhanshu Pandey along with Food Ministers and senior officials of 8 states were present at the daylong conference.

This “State ranking Index for NFSA” attempts to document the status and progress of implementation of NFSA and various reform initiatives across the country, post consultation with states. It highlights the reforms undertaken by States and UTs and create a cross-learning environment and scale-up reform measures by all states and union territories. The present Index is largely focused on NFSA Distribution and will include procurement, PMGKAY Distribution in future. The Index for ranking the states and UTs is built on three key pillars which covers the end-to-end implementation of NFSA through TPDS. These pillars are: i) NFSA— Coverage, targeting and provisions of the Act, ii) Delivery platform, and iii) Nutrition initiatives. The detailed list of the States is at Annexure-I.

The National Food Security Act (NFSA) was enacted on July 5, 2013 and in order to celebrate the day, the conference was organized to deliberate and discuss nutritional security, food security, best practices followed in Public Distribution System, crop diversification, reforms in PDS and storage sector.

Speaking on the occasion, Goyal said that India is now 100% connected under One Nation One Ration Card (ONORC). He complemented PM Narendra Modi for visualizing this pathbreaking initiative and all those associated with it. He said that 45 crore transitions have taken so far providing the beneficiaries the freedom to collect ration from any State/UT in the country. He said that during COVID, ONORC supported migrants.

Talking about the food subsidy to states, \Goyal announced that the deadline to submit claims of pending dues till the year 2019-20 is August 15, 2022. He reiterated that no dues will be entertained after the deadline. He added that the pending bills of the States/UTs that will finalize the audited accounts with supporting documents by August 15, 2022, will be cleared within 60 days (October 15, 2022). However, the States/UTs that will provide details in next 3 months (July-Sept 2022), their bills will be paid by January 31, 2023. And the States/UTs that will take longer than that, will not be paid any interest. He further said that the subsidy claims are pending not because the funds are not available with the Centre, but because the States/UTs are not providing relevant data. As many participating States/UTs raised concern over delay in CAG audit, he directed the officials to get in touch with CAG for expediting the audits. Adding on he said that all claims after April 2020, will be digitized. Goyal said that the absence of states Telangana, Orissa, Jharkhand, Delhi, Andhra Pradesh, West Bengal, Rajasthan, Uttarakhand, Arunachal Pradesh, Assam and Nagaland reflects poorly.