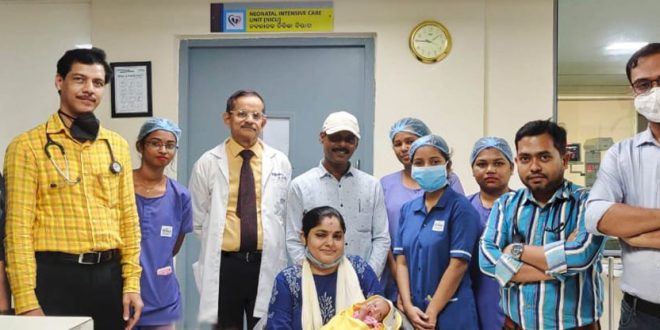 
Bhubaneswar: Doctors at SUM Ultimate Medicare (SUMUM) have battled to save the life of a new born baby weighing only 750 grams.

The baby girl was delivered through caesarean section at 26 weeks of gestation in the hospital and suffered from severe respiratory distress after birth requiring non-invasive respiratory support, Dr. Pradip Kumar Dey, Head of the Pediatrics department in the hospital, said.

“Less than 50 per cent of babies born at such low gestational age survive but the medical team made all efforts to help the baby recover,” he said.

The baby’s mother, belonging to Aska in Ganjam district, had three previous miscarriages and she suffered from several complications including gestational diabetes, hypertension and hypothyroidism when she was admitted into SUMUM, Dr. Chinmayee Kar, Consultant Gynaecologist, who delivered the baby, said.

Continuous care helped the baby to revive and he was taken off respiratory support on the 32nd day. She was put on intravenous fluids and antibiotics. Enteral feeding was started early and the intravenous fluids were stopped on the 17th day, Dr. Dey said.

As the condition of the baby improved gradually, the mother was counseled and advised to go for Kangaroo mother care, requiring skin-to-skin care, which allowed the mother to hold the baby directly against her bare skin. While encouraging mother’s bonding with the baby, it helped the emotional and physical development of the baby, he said.

The parents were full of gratitude for the hospital and medical team when the baby was discharged from the Neo-natal Intensive Care Unit (NICU) after two months. Dr. Dey and visiting consultant, Neonatology Department, Dr. Debasish Nanda were primarily involved in patient care while all staff nurses, consultants and residents helped in case management.