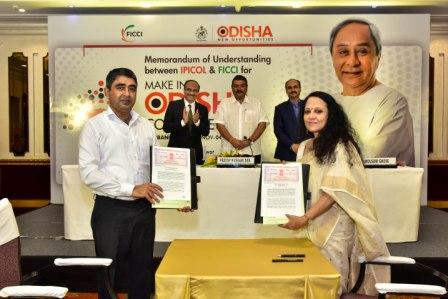 
Bhubaneswar: Industrial Promotion and Investment Corporation of Odisha (IPICOL) and Federation of Indian Chambers of Commerce & Industry (FICCI) on Thursday signed an MoU making FICCI as the national industry partner for the Make in Odisha Conclave 2022.

The Conclave is scheduled to be held from November 30th to December 4th.

Hemant Sharma underlined the fact that Make in Odisha is the most enterprising event in Odisha, attracting investors, entrepreneurs, and industrialists alike.

The preceding two events have already had a tremendous impact by making Odisha the preferred investment destination. The trend will continue this year, and the conclave will reach new heights, bringing more investments and job opportunities to the state.

Speaking about the Make in Odisha Conclave 2022, Pratap Keshari Deb said, “This is going to be the third edition of the Make in Odisha Conclave. The first MIO in 2016 witnessed an overwhelming response receiving over Rs 2 lakh crores worth of investment intent. Over 5000 delegates participated in it and it had over 50 speakers from across the globe, in the second edition it was over Rs 4 lakh crores of investment intent, the goal of this year’s conclave is to surpass all the expectations and more importantly, to firmly put Odisha on the global map.”

The Minister also stated, “The state has grown at 10.1% making it one of the fastest growing economies in India. Manufacturing sector with 56% share in Industrial GSVA grew at 14.3% in 2021-22 while mining sector with 21% share registered 18.1% growth.”