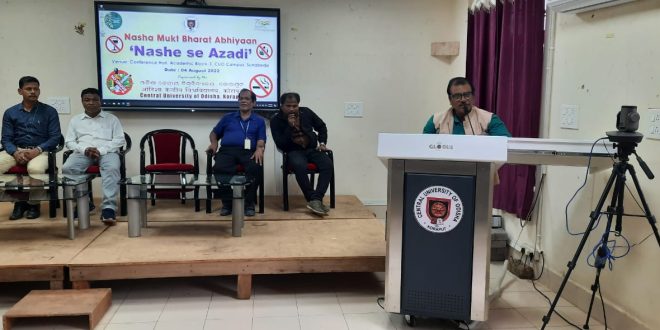 
As a part of Azadi Ka Amrit Mahotsav (AKAM) the Central University of Odisha celebrated Nasa Mukt Bharat Abhiyan in its campus on 04 August 2022.

On this occasion the faculty and staff, under the leadership of Prof. S. K. Palita, the Vice Chancellor I/c, and Prof.

Narayanaswamy and Secretary of Social Justice and Empowerment, R. Subrahmanyam interacted with the 75 universities including Central University of Odisha, 700 educational institutions and more than one lakh youth participated online.

The Central University of Odisha, organized a series of events including a public address gathering at the University campus on the theme of “Nashe Se Azadi” under the national campaign of Nasha Mukt Bharat Abhiyan.

Prof. S. K. Palita, Vice-Chancellor I/c of attended the program as the Chief Guest and advised the University community to keep away from any kind of drugs.

He said “drugs not only destroy the life of any individual, it drastically ruins the family and society as well”.

He highlighted various negative effects of drugs. He urged all the students and staff not to take any drugs and became a good citizen of the country and contributes to the process of nation building.

Dr. Dhaneswar Sahu, Medical Consultant of the University highlighted about the dangerous consequences of the drugs in his address.