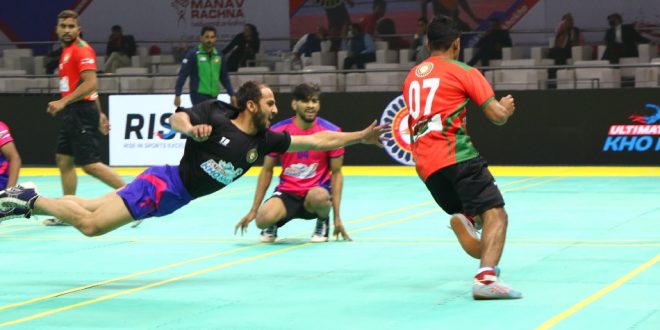 India’s first-ever franchise-based Kho-Kho league has amazed the fans with a gripping top-notch action during the league stage and now all set for the playoffs, kickstarting from Friday, wherein Top-4 teams—Gujarat Giants, Odisha Juggernauts, Telugu Yoddhas and Chennai Quick Guns, will fight for the prestigious title.

The champion team will be awarded with a massive INR 1 crore while the runners-up will bag INR 50 lakh. Third-placed team will take home INR 30 lakh and there will also be other awards worth INR 20 lakh that will be given away.

“This game has a lot of potential and we are committed to give everything in order to take it to the next level. I’m sure the prize money will encourage and motivate not only the teams but also the players as well as the game’s next stars, who are watching the league on TV,” said Tenzing Niyogi, CEO and League Commissioner, Ultimate Kho Kho.

It’s arguably the biggest prize pool for the first season of any Indian league of non-Olympic and non-cricketing sports.

With the knockouts scheduled in a playoffs format, Top-2 teams, Gujarat Giants (23pts) and Odisha Juggernauts (21pts) will play the qualifier 1 on Friday while the third and fourth-placed teams, Telugu Yoddhas (19pts) and Chennai Quick Guns (15pts), will fight in the eliminator in the first match of the day.

Wazirs Abhinandan Patil (Gujarat Giants) and Subhasish Santra (Odisha Juggernauts) have been the key contributors in the success of their teams with 73 and 49 attacking points respectively.

Telugu Yoddhas and Chennai Quick Guns had a mixed journey to the playoffs after winning six and five matches respectively.

Chennai Quick Guns all-rounder Ramji Kashyap is currently the top defender in the league with a time of 19.49 minutes and he is also the second-best attacker with 103 points, after Rajasthan Warriors’ Majahar Jamadar (105).

Arun Gunki will be the player to watch out for from the Telugu Yoddhas camp. He has 70 points to his name, scoring at an average of 7.78 per match.

A loser of qualifier 1 will then lock horns with the winner of eliminator in the second qualifier on Saturday and winners of both qualifiers will fight for the title in the final, scheduled on Sunday.

Ultimate Kho Kho is promoted by Amit Burman in collaboration with the Kho Kho Federation of India.

The on-going Season 1 has been played at the Shree Shiv Chhatrapati Sports Complex, Mahalunge, Pune, Maharashtra.