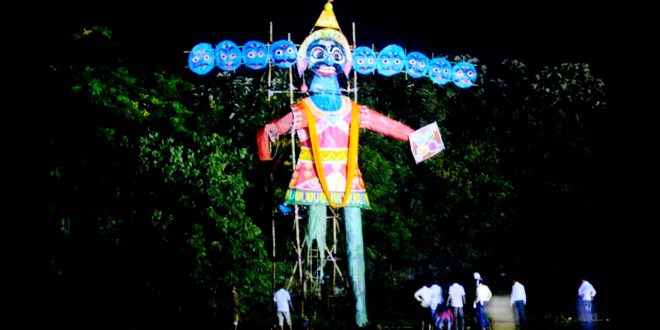 
Ravan Podi in Bhubaneswar 2022: This year the State Government has allowed puja mandaps to organise Ravan Podi on Dushera. Ravana Podi is being organised in the Capital city Bhubaneswar after a gap of two years.

According to reports, the Ravan Podi will be held at four places in the city. The localtions are—Baramunda, Jharpada, Koradakanta and Pahala. The  police have allsowed the organiser to hold Ravan Podi after visiting the grounds.

It is being expected that huge number of crowd will visist the Durga Mandaps to witness Ravan Podi.

Mawnhile, the police have made adequate arranegments for Ravan Podi. As many as five paltoons of polcie will be deployed in the city to maintain the law and order situation and magae crowd during Ravan Podi.

Ravan Dahan is standing evidence of the historical epoch that saw the revival and victory of Dharma over Adharma. Ravana, a manifestation of evil, was destroyed by Rama, a symbol of Dharma or righteousness.

It is considered auspicious to bring home the ashes after the Ravan Dahan, which is performed in Pradosh Kaal during the Shravan nakshatra.