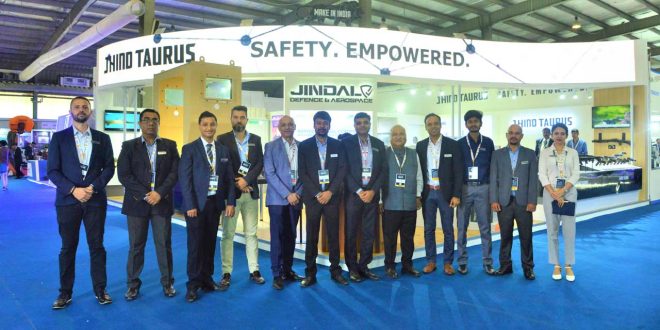 The 5-day expo was inaugurated by Prime Minister Narendra Modi along with Minister of Defence, Government of India, Rajnath Singh; Chief Minister of Gujarat, Bhupendra Patel, and other senior dignitaries.

Jindal Defence & Aerospace has signed an MoU with the state-owned Yantra India Ltd. for engineering, development and manufacturing of defence products with their respective capabilities. This is in line with the Government’s push for public private partnership to serve Indian armed forces.

Speaking on the sidelines of the event, Head, Jindal Defence & Aerospace, CP Agrawal, said,“Jindal Defence & Aerospace is proud to make IndiaAtmanirbhar in the area of advanced materials by presenting nickel based alloys, armour steel glass fibre, and carbon fibre composites for next gen defence applications.We are entering into integrated next generation security and defence solutions for the nation’s armed and paramilitary forces. For this, we are already in discussions with technology partners in India. We are gearing up to develop an artificially intelligent Security System, first-of-its-kind, in the Indian defence ecosystem. This would not only help our forces to build futuristic warfare capabilities, but also help Indian MSMEs to expand their footprints in Indian defence ecosystem.”

Jindal Defence and Aerospacehas positioned itself as the leading strategic material suppliers in defence and aerospace in India, with exports across the globe, meeting stringent quality standards and specifications.Itis aimed at making India self-reliant in niche critical applications comprising missiles & guns, naval, ballistic & blast-proof armour, aerospace, and other engineering applications.