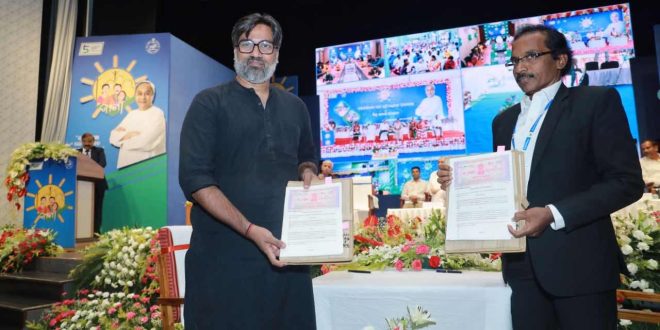 
Bhubaneswar: The Government of Odisha signed a Memorandum of Understanding (MoU) with Tata Steel Foundation today for implementing the Jaga Mission across five municipal corporations of Odisha.

As part of this agreement, the Foundation will be partnering the Housing and Urban Development Department, Government of Odisha, to transform slums into liveable habitat with civic infrastructure and services at par with developed areas within the municipal corporations of Sambalpur, Rourkela, Berhampur, Cuttack and Bhubaneswar.

On the occasion,Chanakya Chaudhary said: “We look forward to the project to further our presence at implementing large-scale change models in the State of Odisha across fields of health, education, and skill development. By constantly recalibrating our strategies, new modes of operations, learning and governance, we aim to emerge as a significant partner in the progress of Odisha in the days to come.”

Jaga Mission or Odisha Liveable Habitat Mission is a unique land titling project of the Government of Odisha to assign land rights to eligible residents and upgrade the physical infrastructure with roads, drains, streetlights, sanitation and clean water supply. As part of the partnership of two years, the Foundation and Government of Odisha will work together to provide land rights to around 2, 50,000 families in 1, 110 slum areas.

In addition, the Foundation will provide technical support for drone surveys, slum mapping, holistic habitat planning and, housing and common spaces design. It also involved in establishing suitable institutions and processes within the government to build and maintain the habitats created. Capacity building of Urban Local Bodies, NGOs and the Slum Dwellers Associations, who are the primary stakeholders in the execution of the Land Rights Act and transformation of slums into liveable habitat will also be taken up by the Foundation.

The Government of Odisha had initially reached out to Tata Steel Foundation as a funding partner for the spatial mapping exercise in phase two of Jaga Mission and have had joint planning exercises in this context. Subsequently, there was an appreciation of the implementation experience and capabilities that TSF team brings on board.

The project comes at a critical juncture when the Foundation’s presence across the seven districts of Odisha have been able to bring about transformational social impact including bringing back 14, 000 out of school children into mainstream education, constructing 30 fully equipped model schools, facilitating 25% increase of average income of 50000 farming households and building multispecialty hospitals and setting up oxygen plants for 7 public hospitals during Covid pandemic among others.