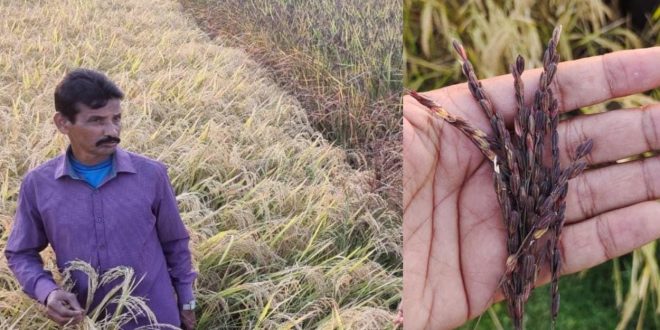 
Koro Mirzapur (Kendrapara): While majority of farmers focus on high yielding varieties and agriculture processes to increase their income for agriculture, Bhimsen Rout, a farmer in Koro Mirzapur village of Kendrapara block has set an example by starting organic cultivation of health friendly paddy varieties.

Like all other farmers in the coastal district of Kendrapara, Bhimsen (57 years) was also earlier cultivating high yielding hybrid varieties of paddy which necessitates use of fertiliser and used to take longer time and consume more water.

However, he developed keen interest on health friendly and less time-consuming paddy varieties, when he learnt about its immense health benefits and high value in market. The real breakthrough came when one well-wisher from his own village connected him with agriculture officials which was followed by sourcing two varieties of traditional paddy seeds, Kalavati and Telengana Sona, two varieties rich in nutrients and with the least glycemic index.

To start with, Bhimsen has planted the two varieties in two side by side fields, combinedly measuring around 1 acre. While the Telengana Sona crop in his field is now ready for harvest in less than 100 days, the Kalavati crop in maturing gradually and generating much interest among local farmers with the black colour of the plant and crop. Many of his fellow villagers and farmers from nearby villages are visiting the field to just have a look at the Kalavati crop, which stands out among all adjacent fields. Even, the effort of Bhimsen has drawn attention of agriculture officials and few officials of Krishi Vigyan Kendra also visited the field and appreciated his resolve and efforts towards making a healthy society though organic cultivation of traditional paddy verities with high nutrients and least glycemic index. After knowing the benefits and high value of the crop in the market, several farmers in Kendrapara are now keen on these varieties, says Bhimsen, happily.

It is worth mentioning here that Kalavati, the black rice with medicinal values is rich in vitamins B and E, niacin, calcium, magnesium, iron and zinc. It works like an antioxidant in the body. The cooked black rice is useful for cancer and diabetic patients. It acts like a blood purifier and is helpful for eyes and skin. It destroys the toxins in the body and keeps liver and kidneys healthy. It also helps reduce fat as well as increases the digestive system.

As per experts, compared to other rice varieties, Telengana Sona has only 51 per cent of glucose, making it most suitable for diabetic patients.