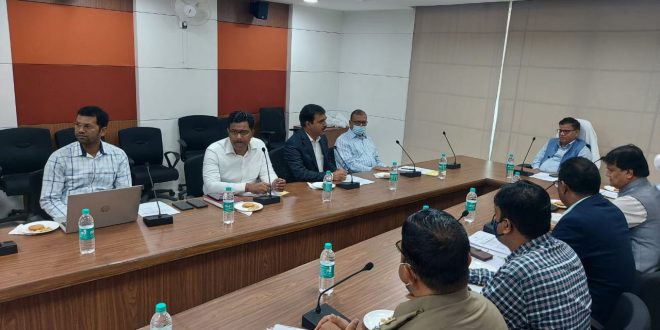 eOffice is a Mission Mode Project under the National e-Governance Programme of the Government. eOffice is developed by National Informatics Centre and implemented by CMGI in Odisha with an objective  to usher in more efficient, effective and transparent inter-government and intra-government transactions and processes. eOffice is built as single reusable system by bringing together independent functions and systems under a single framework to enhance transparency, increase accountability and transform the government work culture and ethics.

The user can access the system using standard Internet browser such as Internet Explorer or Netscape after necessary authentication. The complete system works with a centralized back-end database to store the necessary structured information, keyed in by the user.

In Odisha e-Office has been implemented in 836 Government offices, to operate office functions remotely. e-Office is being implemented under the 5Ts initiative  of the General Administration & Public Grievances Department.

In his welcome address,   Ashish Kumar Singh, Excise Commissioner, Odisha told “Online processing of files is one of the key elements of bringing efficiency and transparency in business process of government. Government of Odisha is one of the front runners in the country in use of digital technology for file processing through successful implementation of OSWAS. However, it will not be possible for OSWAS to reach each and every Office of the State in a short time. Considering the need for digitization of file processing of the Offices not covered under OSWAS, the State Government decided to implement e-Office developed by NIC. CMGI was designated by the State Government to take up the task of implement e-Office in all such Offices including State Universities, Autonomous Bodies, PSUs. E-Office is designed with an objective to do away with the practice of movement of hard files within an organization and integrate various unrelated activities within an organization. E-Office software is user-friendly and easy-to-use. The user can access the system using standard internet browser. The complete system works with a centralized back-end database to store the necessary structured information, keyed in by the user. In Odisha e-Office has been implemented in 836 Government offices, to operate office functions remotely. e-Office will implemented in all the District & Subdistrict level Excise Offices under the 5Ts Initiative of the Excise  Department. I assert to mention that some Government offices are successfully doing intra office file transactions through e-Office. In order to ensure transparency, accountability and data security & integrity e-Office plays an important role”

After the formal launching of the eOffice of Excise Directorate & the District Offices and the Odisha State Beverage Corporation Ltd. by the Principal Secretary, Excise Department, online files were processed by   Prasanna Kumar Sarangi Managing Director, OSBCL &   Ramachandra Palata, Addl. Commissioner, Excise Department, Government of Odisha of their concerned offices.

B.P. Mishra, STD,  NIC Odisha apprised that with such less human resources, this is record to implement eOffice in 840 offices.

Appreciating the efforts of the Centre for Modernizing Government Initiative (CMGI), Principal Secretary, Excise Department Odisha, Sri Nikunja Behari Dhal told” I am glad that CMGI, the administrative reforms wing of General Administration and Public Grievance department has been instrumental in this endeavor. It has improved service delivery and governance by way of moulding knowledge and technology in the perspective of procedural requirements. The Center has done commendable jobs in developing the e-governance modules for timely and transparent delivery of G2C and G2B services online, quick resolution of public grievances trough e-grievance system, effective management of human resources in Government establishments, automation of public offices, seamless transaction between the Directorate and the Secretariat, online training modules for Government officers, and creation of platforms for virtual meetings”

Satya Priya Rath, Executive Director, CMGI in his vote of thanks  speech told “CMGI  is taking utmost care to implement e-Office in the Government offices. E-Office aims at transforming the government work culture and ethics in order to promote greater collaboration in the work place thereby enhancing the efficiency & effectiveness of the organization. Within a very meagre source and resource CMGI could implement e-Office in 840 Government Offices. There are more than 100 offices in pipe line for implementation of e-Office at present. The acceptance of e-Offices in the Government office is quite encouraging.”