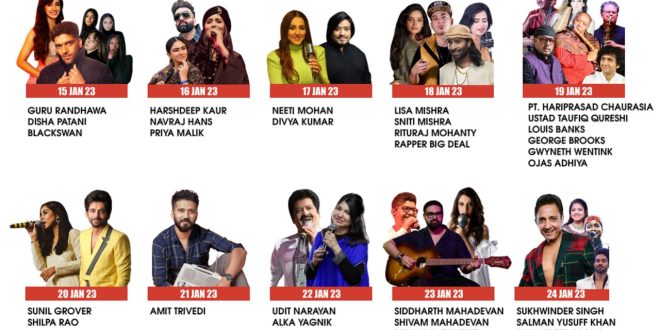 
Bhubaneswar: Creating a festival of festivals in Bhubaneswar, .FEST with its second edition entails a host of surprises with enthralling performances by the best of Odia musicians, singers, stand-up artists and dancers, giving them an international level platform.

A total of 11 stars from Odisha will be seen throughout the festival sharing the main-stage with other internationally acclaimed artists.

The festival is also giving a stage to more than 800 other regional artists who will be entertaining the populace of Bhubaneswar with a host of regional performances in Sambalpuri Folk, Dhemsa Dance, Ghumura, Paika Akhada, Nabadurga Dance, Jodi Shankha, Fate Fighters Mallakhamb and many more in the 3 stages present across the Flea Market and Night Bazar, near IDCO Exhibition Ground.

Commenting on the star performances during .Fest, Dr. N. Thirumala Naik, Labour Commissioner-cum-Nodal Officer, .FEST (Bhubaneswar City Festival), stated, “This year, we aim to make the .FEST not just bigger but better by creating a platform for both regional and national artists. Odisha is filled with raw talent and we are happy to see it all come to the limelight through our platform. You will witness mesmerizing yet at the same time jaw dropping performances from some of our best.”

Providing the experience of a fortnight long festival of festivals, .Fest was first curated in 2018. The previous edition of .Fest witnessed a massive success with millions of Bhubaneswar locals & others from around the world including the best hockey players along with International and national media.