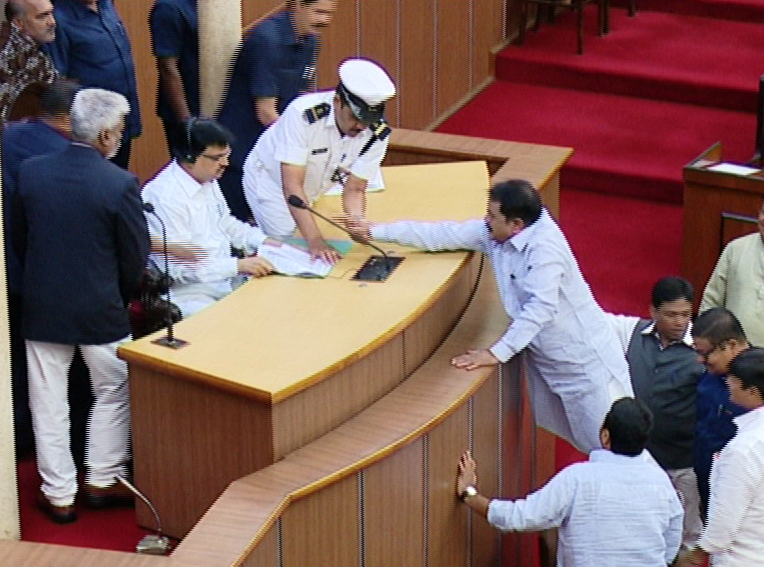 BHUBANESWAR: The Odisha Assembly on Friday witnessed uproarious scenes with the opposition demanding an unconditional apology from Chief Minister Naveen Patnaik over alleged lock up of some female students during his visit to Rama Devi Women’s University in the capital city.

The Speaker adjourned the house till Saturday as normalcy did not return in the House after several adjournments.

As soon as the house assembled for question hour, Congress chief whip Tara Prasad Bahinipati and other members of the party rushed into the well showing a newspaper, which had carried a news piece on locking up some students during the visit of the Chief Minister to inaugurate the varsity.

Bahinipati alleged that around ten girl students of the University were locked up in a room by the police during the Chief Minister’s visit on Thursday.

The Congress members created a ruckus while Bahinipati attempted to scale up to the speaker’s podium and grab his mike.

Unable to run the house, Speaker Niranjan Pujari adjourned the house till 12 noon.

As soon as the House reassembled at noon, the Congress members again created a furore in the house forcing the speaker to adjourn the house till 3 pm.

The opposition BJP also staged a protest in the House over the Rama Devi University incident.

Later, the house was adjourned till Saturday as noisy scenes prevailed in the house.

The Leader of Opposition Narasingha Mishra said the Chief Minister should come to the house and beg apology for illegally confining girls in their college.

“This action of police clearly violated the basic human rights and constitutional rights of girls. The Chief Minister should beg apology and make clear what action has been taken against the responsible persons,” said Mishra.

BJP woman MLA Radharani Panda said the action by police is an inhuman incident and sought the reply of the Chief Minister.

The ruling BJD, however, denied the incident saying that the girls were not locked up in a room.

“No girl was locked or confined to a room. The students were asked to come to the university in their uniform along with their identity cards issued by the institution. Those who had not come in uniform were not allowed to enter the campus,” said BJD legislator and party’s students’ wing president Byomkesh Ray.