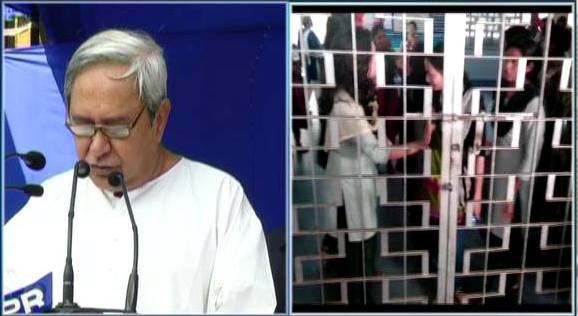 No student was confined during visit of Odisha CM: Minister

BHUBANESWAR: Odisha government on Saturday denied that the girl students were detained in a room during Chief Minister Naveen Patnaik’s visit to Rama Devi University campus on December 3 even as the girls sought the intervention of the Odisha Human Rights Commission (OHRC).

“The report published in media that girl students were detained in the Rama Devi Women’s University is not based on truth,” Parliamentary Affairs Minister Bikram Keshari Arukh told the state assembly.

He argued that no girls were detained nor were debarred from entering the campus and participating in the function.

The Minister said while number one gate was opened for students and guests, number two gate was specially dedicated for VIPs.

Some students tried to enter the varsity campus through prohibited gate while students were allowed to go to meeting venue through gate no 1, said Arukh.

Speaker Niranjan Pujari had earlier directed the state government to issue a statement on the allegations of girl students having been detained after opposition Congress members disrupted proceeding of the House and demanded an unconditional apology from the Chief Minister.

Notably, some students were allegedly detained at the varsity campus during the visit of Chief Minister to inaugurate the Women’s University on Thursday.

The Assembly was adjourned at least four times during the day due to the din by the opposition MLAs, who described the incident as illegal and violative of the human rights and constitutional rights of the girl students.

As the impasse continued in the Assembly for the second consecutive day, Pujari convened an all-party meeting where it was decided that the government will give a statement on the allegations about girls’ detention.

Meanwhile, PCC president Prasad Harichandan demanded to lodge criminal offence against the Chief Minister for infringing upon the human rights of the girl students.

Some students lodged complaints before the Odisha Human Rights Commission while women wing of BJP moved to the State Commission for Women.

“We wish to bring it to your notice that this is a gross violation of human rights. Locking down the students and allowing non-students is undemocratic and has taken place in the presence of the Chief Minister. We request you to intervene in the matter, get an inquiry conducted, give us justice and take action against the culprits,” demanded the girl students in a memorandum submitted to the office of the OHRC.