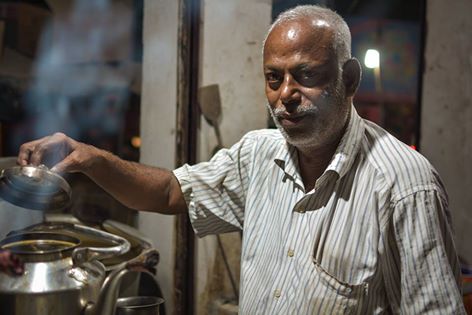 The tea stall owner donated blood over 205 times to save many lives.

CUTTACK: Despite being a petty tea stall owner, he is a good Samaritan for needy patients especially in terms of blood donation. He is now deemed to be a Messiah among the peripheral slum dwellers and their street urchin kids.

He is D. Prakash Rao, a face in the crowd of the millennium city Cuttack, which is also the old capital of Odisha.

He is a son of war veteran, who after his retirement from army started that tea stall and Prakash Rao helped his father since his school days.

Rao, 58, a tea stall owner in Cuttack, runs a school for 70 underprivileged children for free. Besides, he has donated blood 205 times since 1976 to till now. There’s more to story of this remarkable man!

He runs the school ‘Asha Ashawasana’ near just beside the boundary wall of Utkalmani Gopabandhu-founded Samaj Press in Buxi Bazaar area in the silver city. The school is just behind his humble home at the Telugu Sahi (a slum) near Nari Seva Sadan.

Rao, who had started the school 14 years back, is managing it with 50% of income from the tea selling.

For good Samaritan and regular blood donor Rao, it has been a life’s mission that is beginning to bear fruit after a decade of relentless struggle that nearly broke his own home. A resident of the slum, Rao was appalled to see children being pushed into crime and become drug addicts and alcoholics.

He knew that any meaningful change could only be brought through education, but there was no school in the vicinity of the slum. So Rao decided to start one from his own house.

But starting a school is easier said than done. Despite stiff opposition and ridicule from his family and neighbours, Rao managed to persuade four children to enrol. Classes commenced from one room of his two-roomed house in 2002.

“My family had to move into the only other room while my mother took to sitting on a cot under a tree in front of my house during the classes,” he reminiscences.

However, his perseverance soon bore fruit and more children began to attend his school. The parents who had earlier been sceptical and reluctant gradually relented. By 2004, there were 25 students in classes I to III. In the same year, a local club Asha Ashwasana came forward and built a one-hall school building in the slum.

Rao bore all expenses for the school—from paying salaries to teachers to providing uniforms, text books and even food to the children—from the meagre Rs 20,000 a month that he made from the tea stall at Buxi Bazaar area.

“The students are belonging to families of rickshaw pullers, daily wage earners and municipal drain workers from the slum. My reward has been the change that the school brought in the slum,” said Rao.

Recollecting his childhood days, Rao said that he had got a scholarship in class V. But, he could not continue his study due to financial constraints and got engaged in the tea stall being run by his father at that time.

Besides setting up the school, he also successfully provided good education to his two daughters.

While one got married after completing her Post Graduation from Ravenshaw University, another daughter is studying in Sydney in Australia. She completed her study in hospitality management under Biju Patnaik University of Technology and Management.

Rao has been felicitated recently by Odisha Human Rights Commission (OHRC) for his noble cause.

Here is the documentary film of the tea stall owner