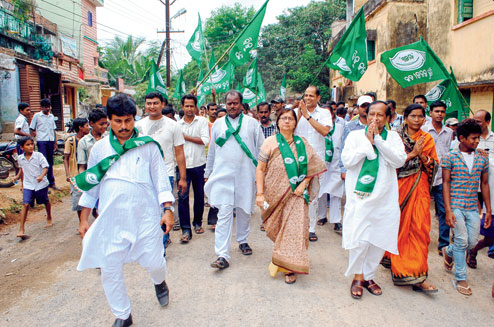 BERHAMPUR: Ruling BJD has launched a drive to highlight its achievements after facing criticism for alleged irregularities in selection of beneficiaries under National Food Security Act (NFSA) and the spate of farmers’ suicides in Odisha.

The party held a public meeting ‘Biju Bikash Samabesh’ on Saturday at Patapur, about 45km from here, to mark the birth centenary of former Chief Minister Biju Patnaik, BJD MLA S N Patro, who presided over the meeting said.

Patro said the ‘Samabesh’ would be held across the state during the year.

Ministers, MPs, MLAs and party functionaries of Ganjam district publicised the welfare measures undertaken by the state government and accused the Centre of “meting out step-motherly treatment” to Odisha. The speakers also criticised Congress.

However BJD supremo and Chief Minister Naveen Patnaik, who represents Hinjili of Ganjam district, was conspicuous by his absence.