Bhubaneswar: After arresting businessman Mahimananda Mishra in a murder case, the Paradip police has sought information about city-based Hotel Empires, which is owned by OSL group.

The General Administration department has furnished information to police about the hotel, which is situated at Saheed Nagar in Bhubaneswar.

Mahimananda Mishra is the managing director of OSL.

Meanwhile, the Paradip police will take the industrialist on a four-day remand from January 4 in connection with the murder of Mahendra Swain, general manager of Seaways Shipping and Logistics Ltd (SSLL).

Mishra and his aide Basant Bal were scheduled to be on police remand from Thursday for interrogations. But looking at his ill health, for which he was admitted to Jagatsinghpur district headquarters hospital on Tuesday night, police sought to extend the remand dates.

The court on Thursday allowed the police to take Mishra on remand from 1 January. 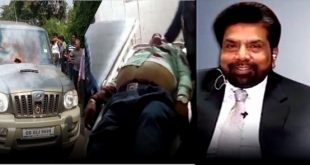