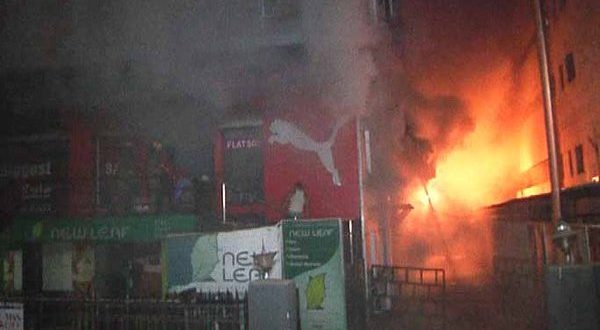 Fire engulfs All That Jazz showroom, goods worth lakhs reduce to ashes

BHUBANESWAR: Property worth lakhs of rupees was reduced to ashes after a massive fire broke out in All That Jazz showroom at Maharshi College Square in the capital city of Odisha here on Monday.

Sources said the incident occurred at about 2 am on Monday while the reason of the fire is yet to be ascertained.

It was suspected that electric short circuit might have caused of the fire spread.

As many as five fire brigade units were pressed to douse the fire. But, lakhs of dress material along with furniture gutted in the fire. However, they extinguished the flame by the morning after four hours of operation.

No casualty has been reported due to the mishap, said an employee of the showroom.

Sources said the fire was reported after security personnel of ‘All That Jazz’ clothing showroom found smoke emanating from the shop building. They immediately informed the fire tenders and police.