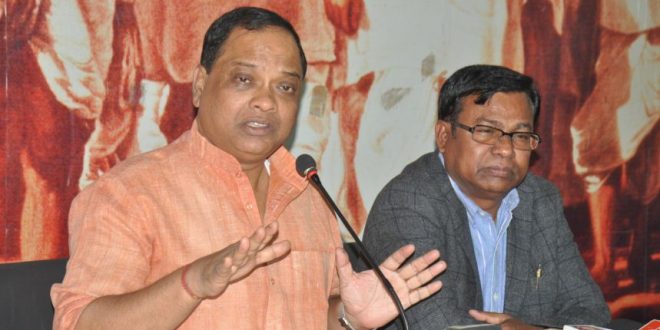 BHUBANESWAR: After few days of truce call, senior Congress leader Bhakta Charan Das and Pradesh Congress Committee (PCC) president Prasad Harichandan on Tuesday entered into a war of words once again exposing that ‘all is not well’ between the two leaders.

Bhakta Das and Harichandan indulged in a verbal duel after the latter allowed former Narla block president Ashok Chand to give his speech during the observation of 10 years completion of MGNREGS at Congress Bhawan here.

Soon after Chand was asked to speak at the function, the former Kalahandi MP stood up from his seat and marched to the PCC president complaining that Chand is not a member of Congress.

He said how the former Narla Block president was allowed to speak while he ceased to be a Congress member leading to a verbal duel between the two leaders.

However, they got pacified following the intervention of Odisha Congress co-in-charge Subhankar Sarkar.

Chand told media persons that he cut short his speech following the war of words between the two leaders. He also said that he has already rejoined Congress after the change of Kalahandi president in recent months.

However, Bhakta Das denied having entered into a verbal duel with the PCC president over the issue.

The intra-party fighting in Odisha Congress had come to fore when Das and Harichandan had entered into a war of words over the appointment of Kalahandi district Congress president in December.

Das had alleged that decision over appointing Govardhan Das as Kalahandi district Congress president had been taken sans his consultation.

However, Das later clarified that there was a communication gap between PCC president Prasad Harichandan and him which led to verbal duel over the appointment of Kalahandi district president.