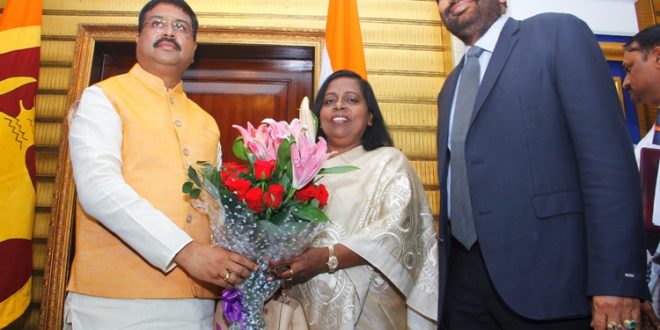 Both dignitaries are in India at the invitation of Pradhan to participate in the ceremony at Paradip where Prime Minister Narendra Modi will be dedicating to the nation the Indian Oil refinery on Sunday.

During his meeting with the Energy Adviser of Bangladesh, Pradhan conveyed India’s commitment to work with Bangladesh to further bilateral cooperation in the energy sector.

He informed on the investment proposals of Indian Oil Companies in Bangladesh and said that their early implementation would create a win-win situation for both countries and sought cooperation from Bangladesh government.

With the commissioning of the Paradip refinery, Pradhan said, India would be once again in a position to export petroleum products to Bangladesh. In this regard, he expressed keenness of India in setting up of marketing infrastructure in Bangladesh.

He also sought favourable consideration for the transit of LPG to India’s North Eastern region through the territory of Bangladesh.

Pradhan noted that India PSUs were interested in participating in petroleum sector of Bangladesh, including in exploration, refinery expansion and related PMC works.

Pradhan expressed his appreciation for the valuable support of Govt. of Bangladesh in the implementation of Indian projects.

Pradhan during his meeting with the Sri Lankan Deputy Minister of Petroleum Resources Development discussed the issues such as the expansion of activities of Lanka IOC, in Sri Lanka, including in the retail business, bunkering and marketing of ATF and LPG.

Lanka IOC is a subsidiary of Indian Oil Corporation. He reiterated the commitment made by Prime Minister to work with Sri Lanka to make Trincomalee a regional energy hub.

He expressed India’s interest in establishing refinery and bunkering operations in Sri Lanka.

He expressed confidence that both Sri Lanka and India will work in a spirit of partnership in the hydrocarbon sector.

During the meetings, senior officials from Bangladesh and Sri Lankan side dealing with oil and gas sector were present. On the Indian side, Pradhan was accompanied by Secretary Petroleum, senior officers of MoPNG & PSUs under the administrative control of the ministry.