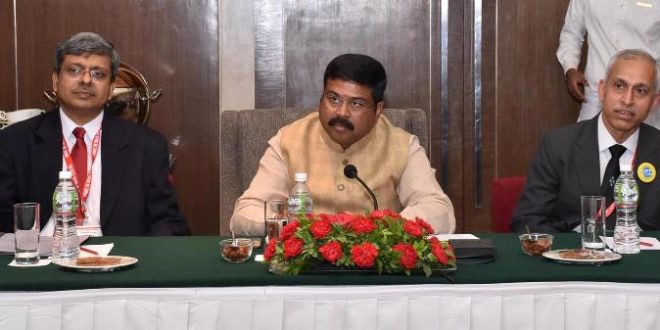 MUMBAI: Petroleum and Natural Gas Minister Dharmendra Pradhan on Monday discussed with the Odisha chief secretary Aditya Prasad Padhi on preparing a roadmap to develop downstream petrochemical industry in and around Paradip, which will be supported by the 15 MMTPA Paradip refinery.

It was agreed that Indian Oil Corporation should adhere to the timelines for development of Polypropylene Plant and other projects which are at various stage of implementation. Chief secretary assured all support from Odisha government for the projects.

Pradhan and state government officials discussed the issue in Mumbai on the occasion of Make in India week. The Oil Minister was accompanied by Petroleum Secretary, senior officers of the ministry and CMDs of HPCL, BPCL and senior officers of IOC. Chief secretary was accompanied by development commissioner, industry secretary, MD IDCO and commissioner of commercial tax.

BPCL and HPCL requested the state government for land in Koraput for an LPG plant on Common User Facility (CUF) basis. Representatives of state government agreed to consider this favourably on a priority basis.

Because of the presence of irrigated land at Maneswar, it was advised and jointly agreed in the meeting to develop a new location by BPCL and HPCL in and around Sambalpur in a non-irrigated land with the feasibility of Railway siding as a replacement of CUF Maneswar with assistance from state government.

Pradhan requested the state government for allocation of land for early commencement of Hydrocarbon Skill Development Institute in Bhubaneswar. State government representatives agreed to early action on this.

The Odisha government made a request for an aviation fuel refuelling facility in Koraput district for the helicopters of the BSF and the state Government. Minister agreed to this on a priority basis as Koraput is a Left-wing Extremism affected the district.