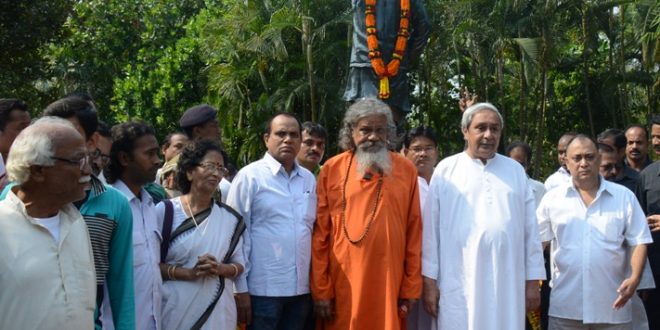 BHUBANESWAR: As Odisha celebrated the birth centenary of its former chief minister Biju Patnaik with great fanfare on Saturday, chief minister Naveen Patnaik said Biju Babu was, not a person, an institution.

“Biju Babu is an idea in continuity, an idea of realising the dream of progress and prosperity, an idea of Odia self-esteem, selfless service and empowerment. He is an idea that every Odia wants to follow,” said the chief minister.

He said even though Biju Babu was at the top of national politics, he was with the poor people and successfully carried out development in village level.

“Biju Babu was the Baraputra of Mother India. He went beyond the limits of regional and national boundaries to international height,” said Patnaik.

His son and chief minister Naveen Patnaik marked the beginning of the celebration by garlanding the statue of Biju Patnaik in the BJD party office premises.

Later, an 18-foot statue of the late leader was unveiled at Biju Patnaik International Airport of Bhubaneswar. The chief minister inaugurated a sand sculpture created by renowned sand artist Sudarsan Patnaik on the occasion of Biju Patnaik Birth Centenary at the new domestic terminal.

A mini marathon was also held in the city that was flagged off by sports and youth services minister Sudam Marandi. It started from Forest Park and culminated at Kalinga Stadium. Overall 3,175 people including 441 women from Odisha, Bihar, West Bengal, Uttar Pradesh and Jharkhand participated in the event.

In Paradip, another mega function has been organised by BJD leader Damodar Rout to mark the occasion. Rout kicked off the proceedings with a floral tribute to the great leader’s statue at Atharabanki. Subsequently, an all-faith prayer meeting was organised.

In Cuttack too, tributes poured in for Biju Patnaik. Floral tributes were paid at all the statues across the city on the occasion.